WIP: Between the Bolter and Me: Kingdom Death challenge

Almost two months ago I received a box containing the multi-part plastic models from Kingdom Death: Monster. The box was sent to me by Bigbossredskullz, but it originally came from the authors of Between the Bolter and Me. They have decided to send the box of parts around to other hobbyists, so that they can use them to create models in their own style. Their plan is to collect pictures of all the different models, and se how the kit can be used in different ways.

I've been really distracted by the Nestorian Infestation project, and Silver tower, but have been able to choose some bits I like, and put it together into a quite interesting female model.

I don't have the rest of the Kingdom Death: Monster box, so instead of making a gaming pice, I decided to use the parts to create a small diorama. The base was made with a strange looking root that I found over a year ago. I finally found a use for it. The design and setting of the game is quite interesting. I especially like the stone faces appearing everywhere on the artwork and on the models bases. I wanted to have something similar on my model, to catch the same mood, so I glued green stuff casts of baby faces copied from small angle statues around the roots. 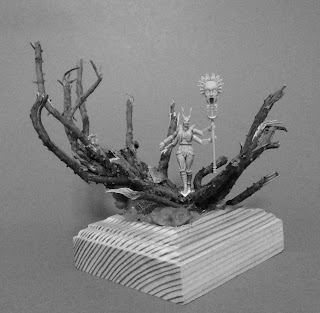 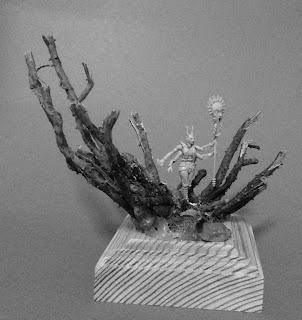 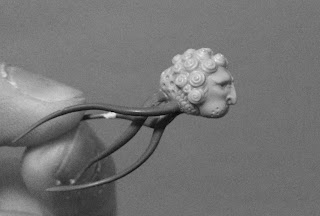 One of my favourite parts from the kit is this stone lions head. It originally sits on top of a staff to be used as a weapon, but I decided to use it as a pet for the main model instead. 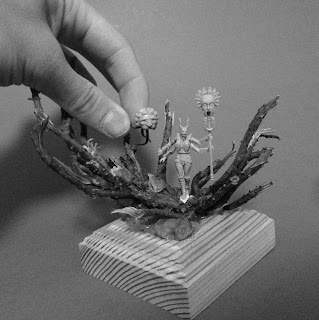 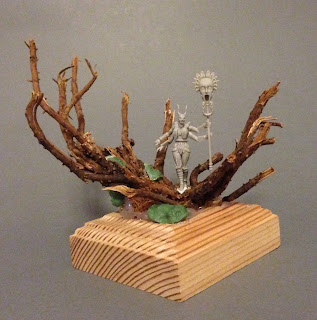 I still have green-stuffing and painting left to do, but I feel like I've gotten off to a good start!

It's great to be able to join this interesting project, so I really have to thank the people from Between the Bolter and Me!

I've already sent the box to the next hobbyist, so there are more interesting models on the way!