It has been a while since my last post. I've been busy converting and painting for MassiveVoodo's painting competition; Bananalicius vol 2. I'll post my entries here after the judging.

I have however started another project, an Inquisitorial Warband. The warband will be one of my entries in the Scandinavian painting competition, The Fang, the 30th of may. The picture quality is quite poor, but you'll get an idea. 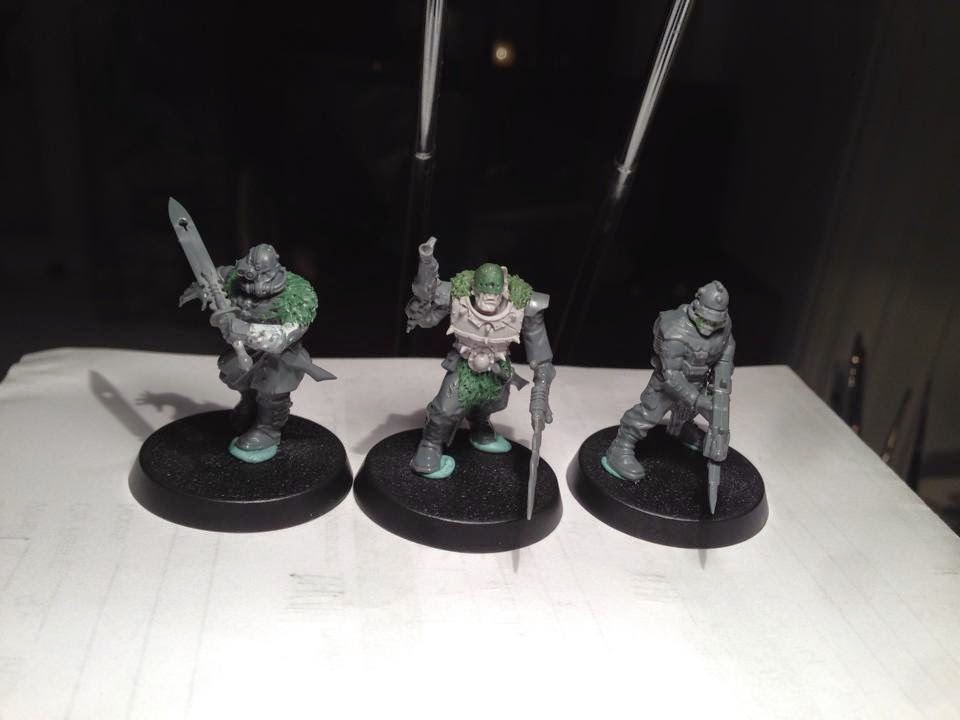 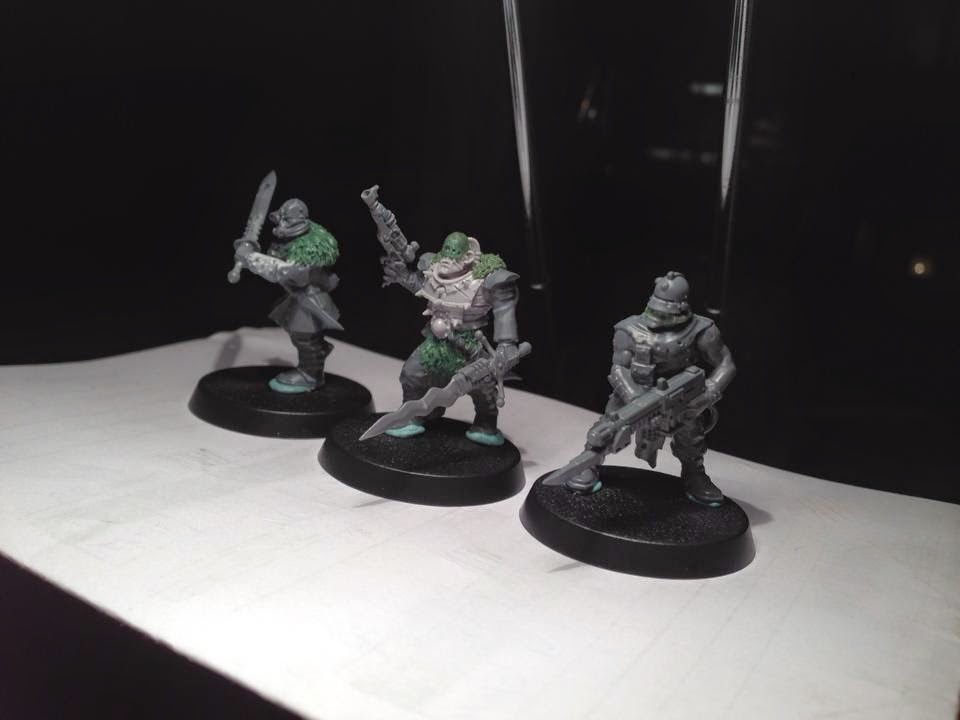 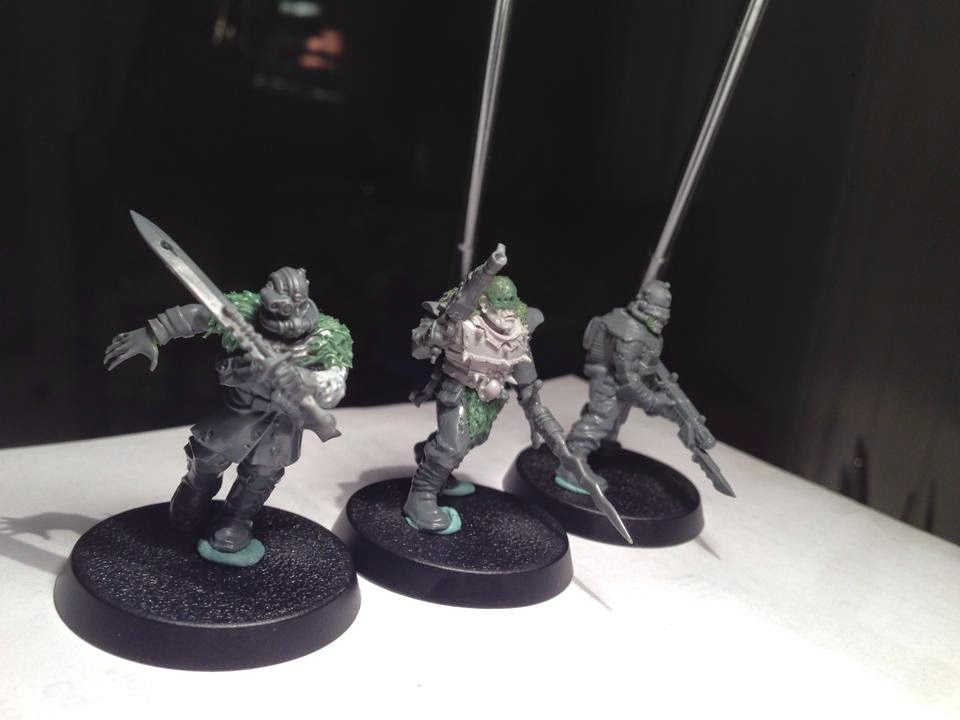 Email ThisBlogThis!Share to TwitterShare to FacebookShare to Pinterest
Labels: 40k, Inquisitor, The Fang

I was asked how I did the Nurgle eyes on the models base, when posting my second photoshoot of my Great Unclean One . Recently I re-based my old Plague Ogryns, and decided to give their bases some Nurgle-looking eyes as well.

I took some pictures while making the bases, to make a quick tutorial on how I do my Nurgle bases:

I. Roll a lot of small balls in some kind of sculpting putty. I use green-stuff or milliput, depending on which putty i'm working on at the moment. Usually i just roll a couple of eye-balls with the left overs when i'm done sculpting.

I then make a base and randomly glue them on. be careful not to glue them where the model is supposed to stand.

II. Paint the base like the rest of your army. This base was painted like the World Eaters bases, but with some green and sepia glazes to give them a more Nurgle look.

paint the pupil by adding a small black circle in the middle of the iris. 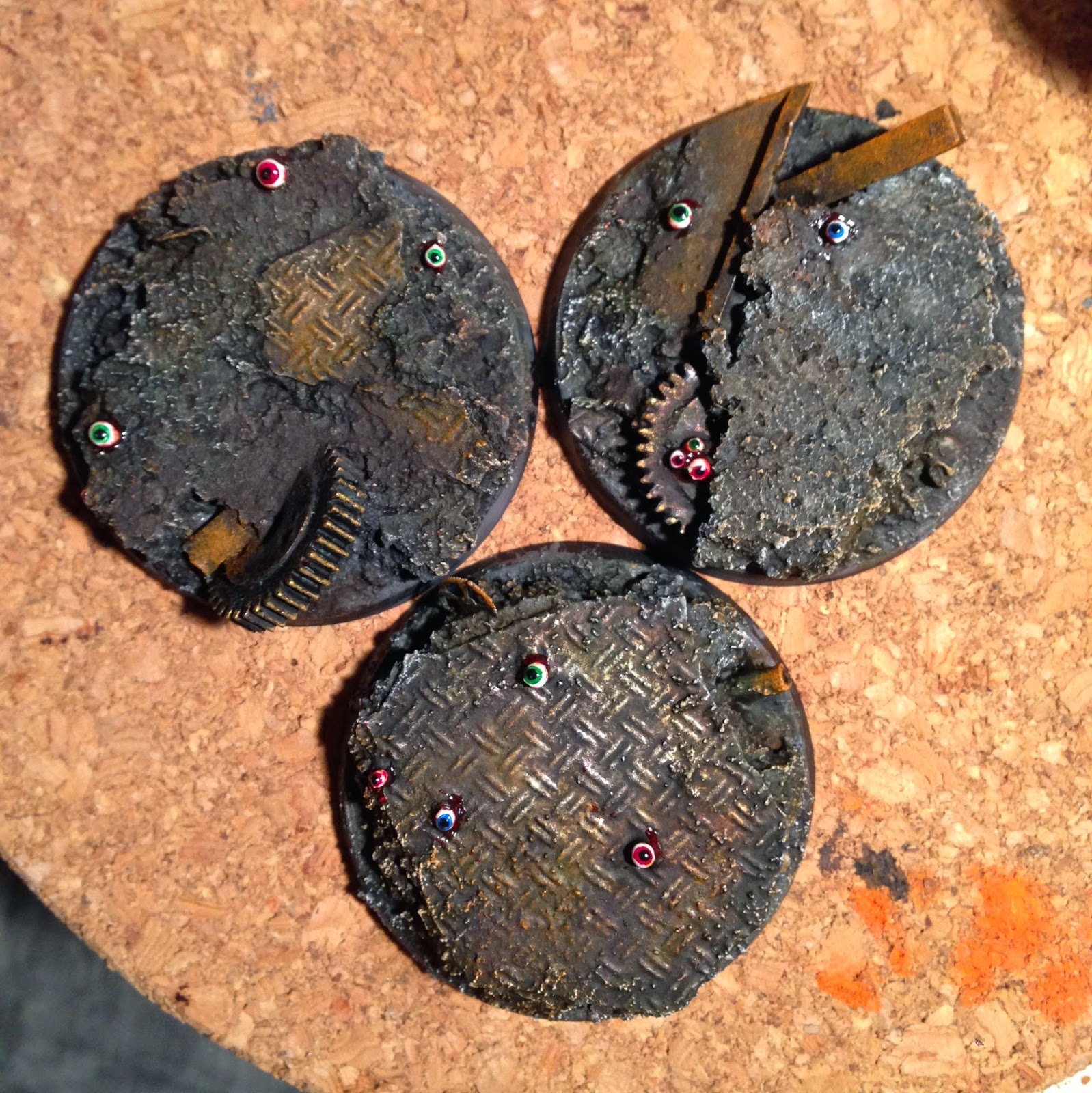 IV. GW's "blood for the blood god" is painted on the bottom half of the eyes. Try to make this look natural by not having a straight line around the eye. Stipple some blood on the ground around the eyes to blend them with the base.

Finish of the eyes with a layer of water effect (or any other transparent gloss paint).

I finally finished my Forge World Blight Drone. This model was a lot of fun to paint. The amount of detail on the model is incredible. The combination of mechanical parts and flesh is a lot more grotesque than other Daemon Engines. Which is perfect for Nurgle. I'm planning to convert a Forge Fiend and a Helldrake in the same style as Forge World did this model. Still not sure how to achieve this, so if anyone has any tips or ideas that could be relevant, feel free to comment.

The models armour was done in the same way I do my World Eaters (check out the tutorial: http://wilhelminiatures.blogspot.no/2015/03/tutorial-heresy-era-world-eater.html) only glazed in GW's Sepia shade. I really like glazing white with sepia. It sometimes gives the model a greenish look, which is perfect for Nurgle Armour.
The skin was done with light human skin-tomes, shaded and glazed with purple to give it a more sickly feel, and to contrast the armour. 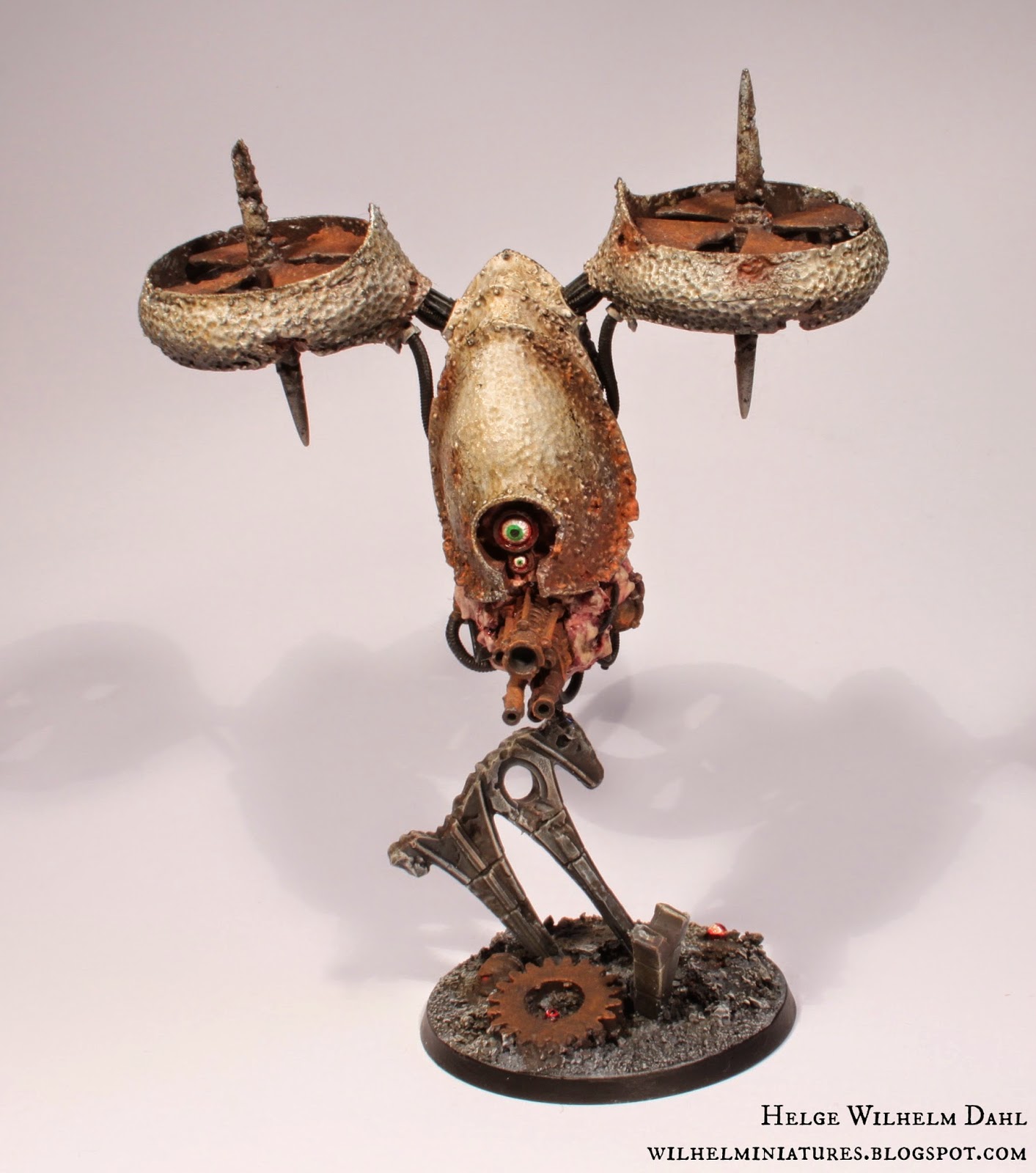 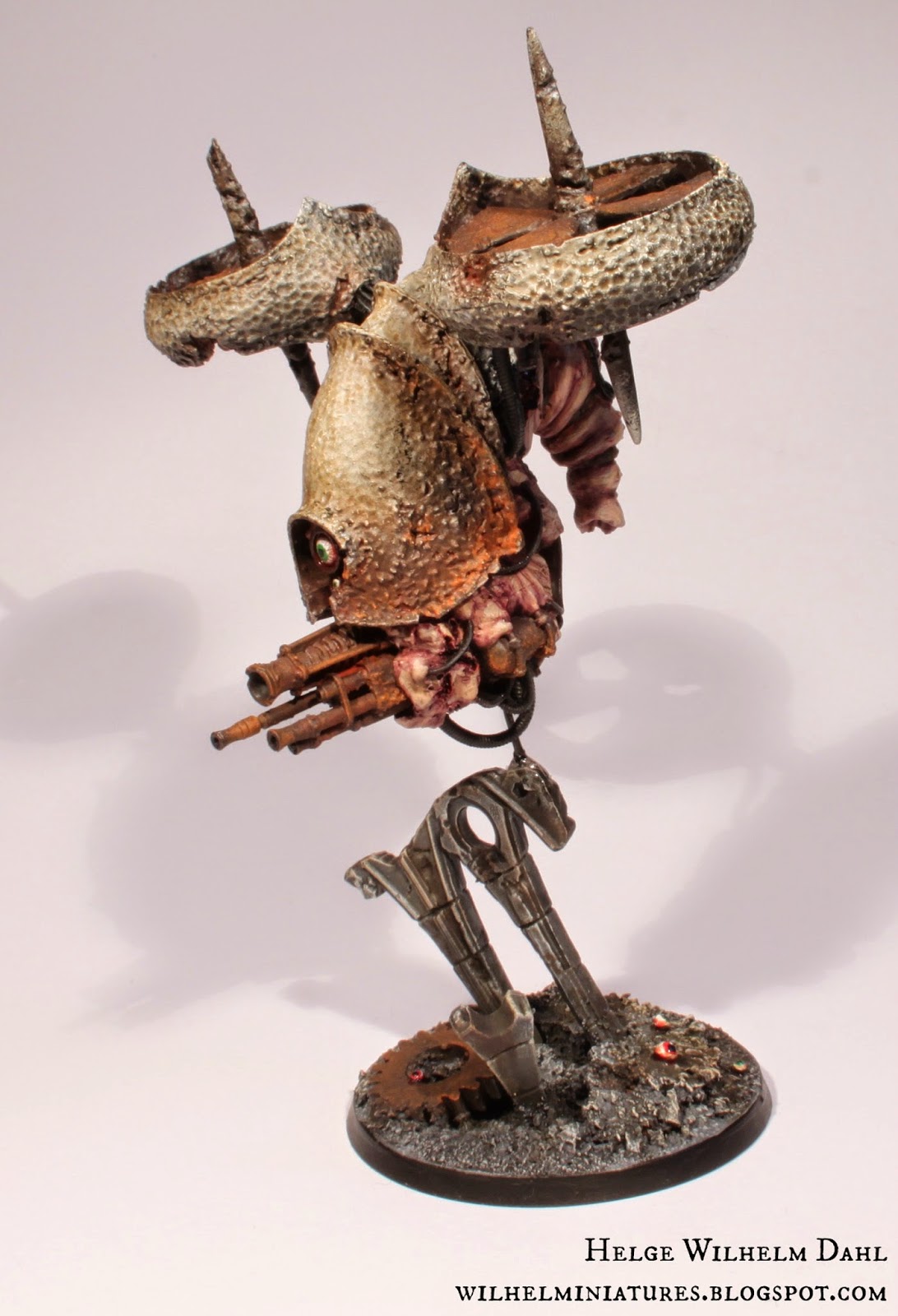 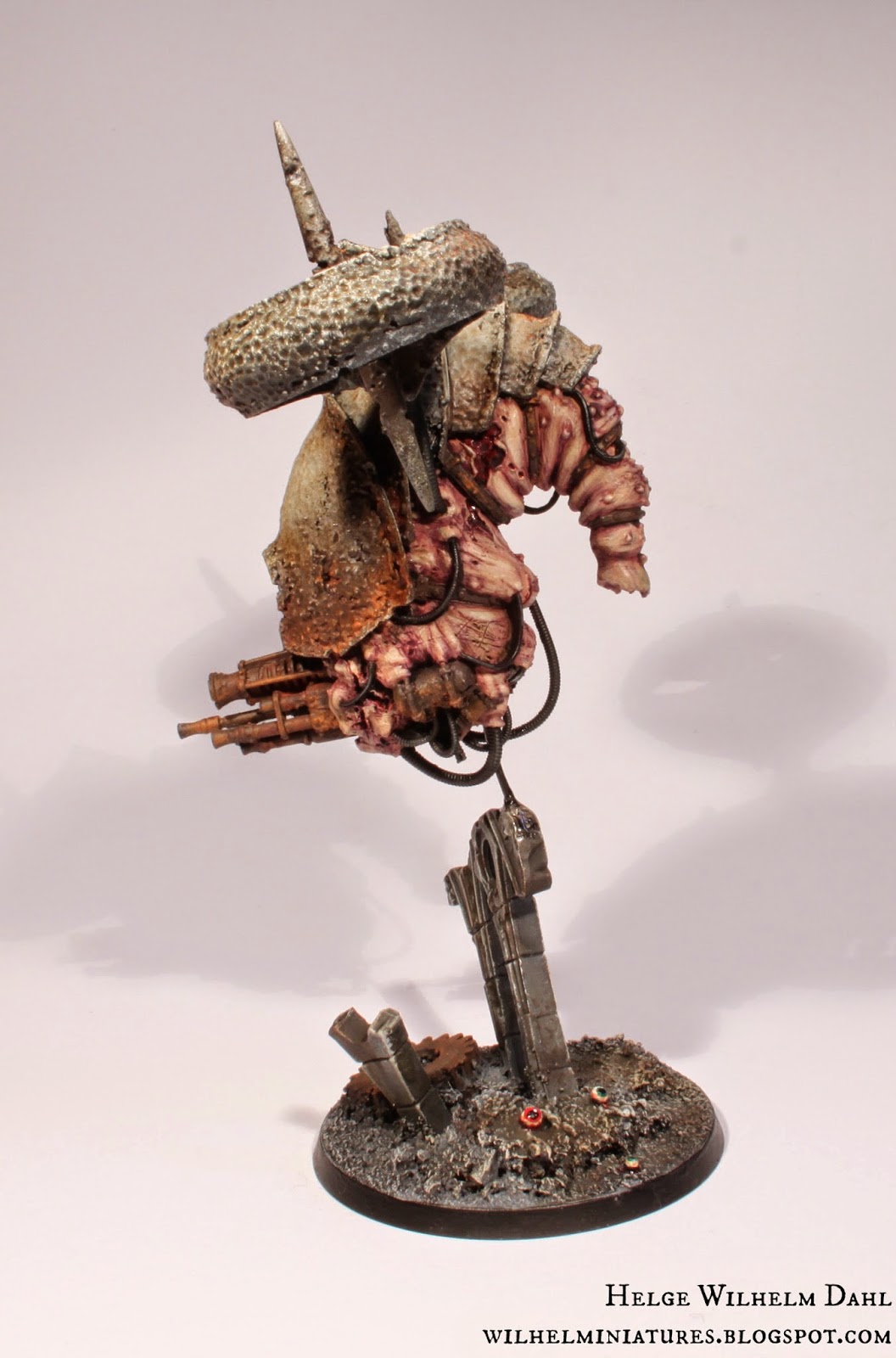 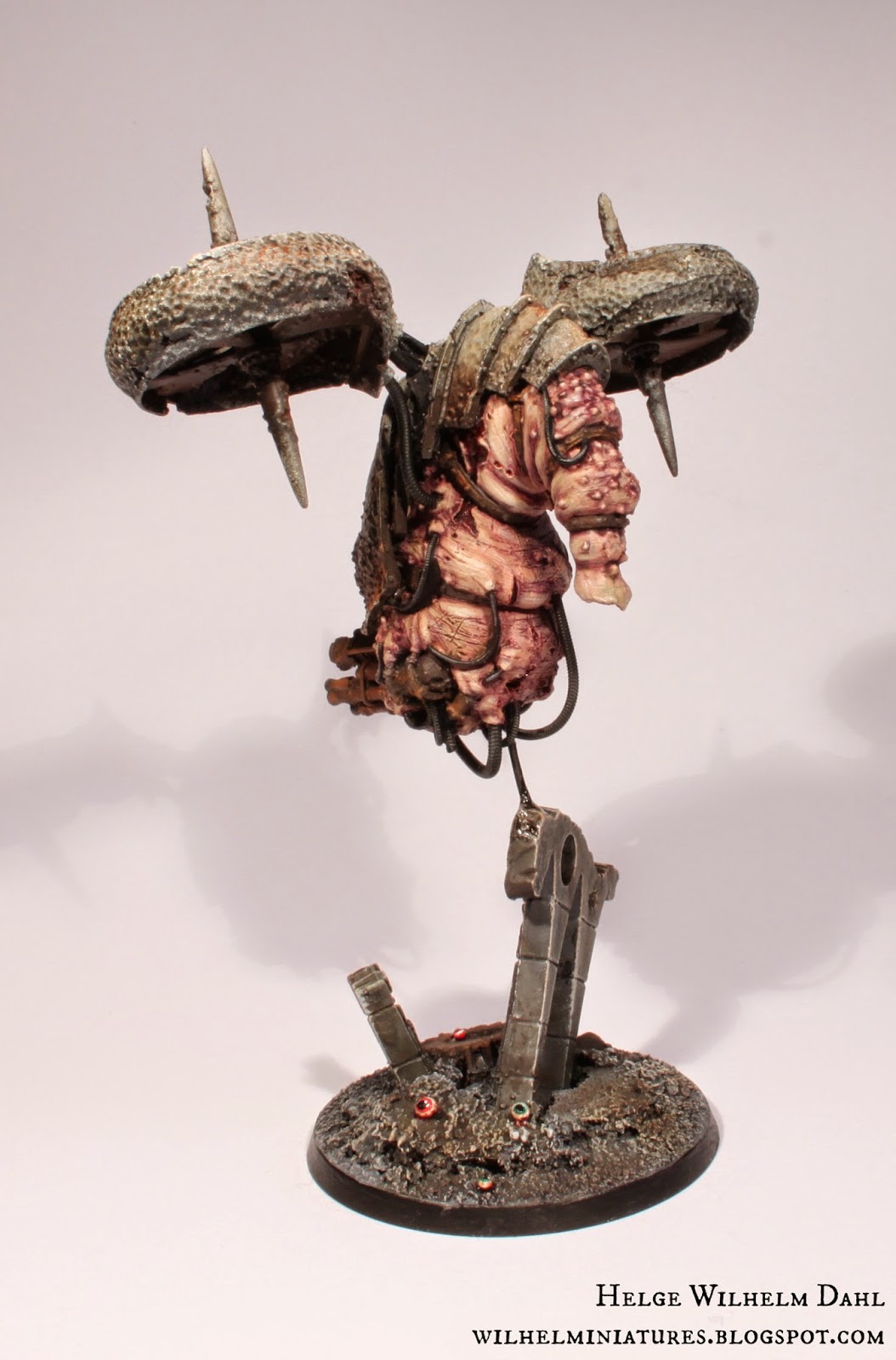 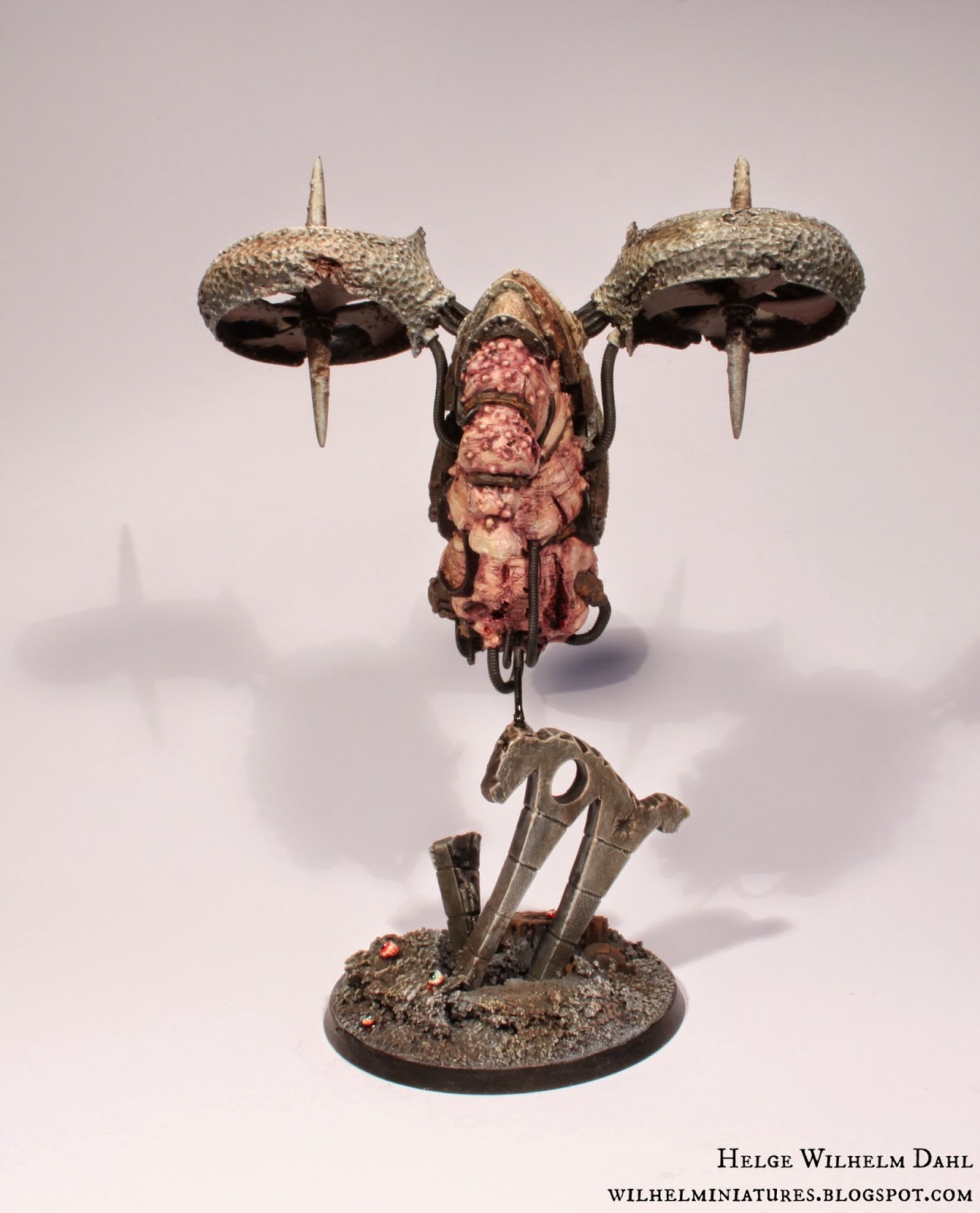 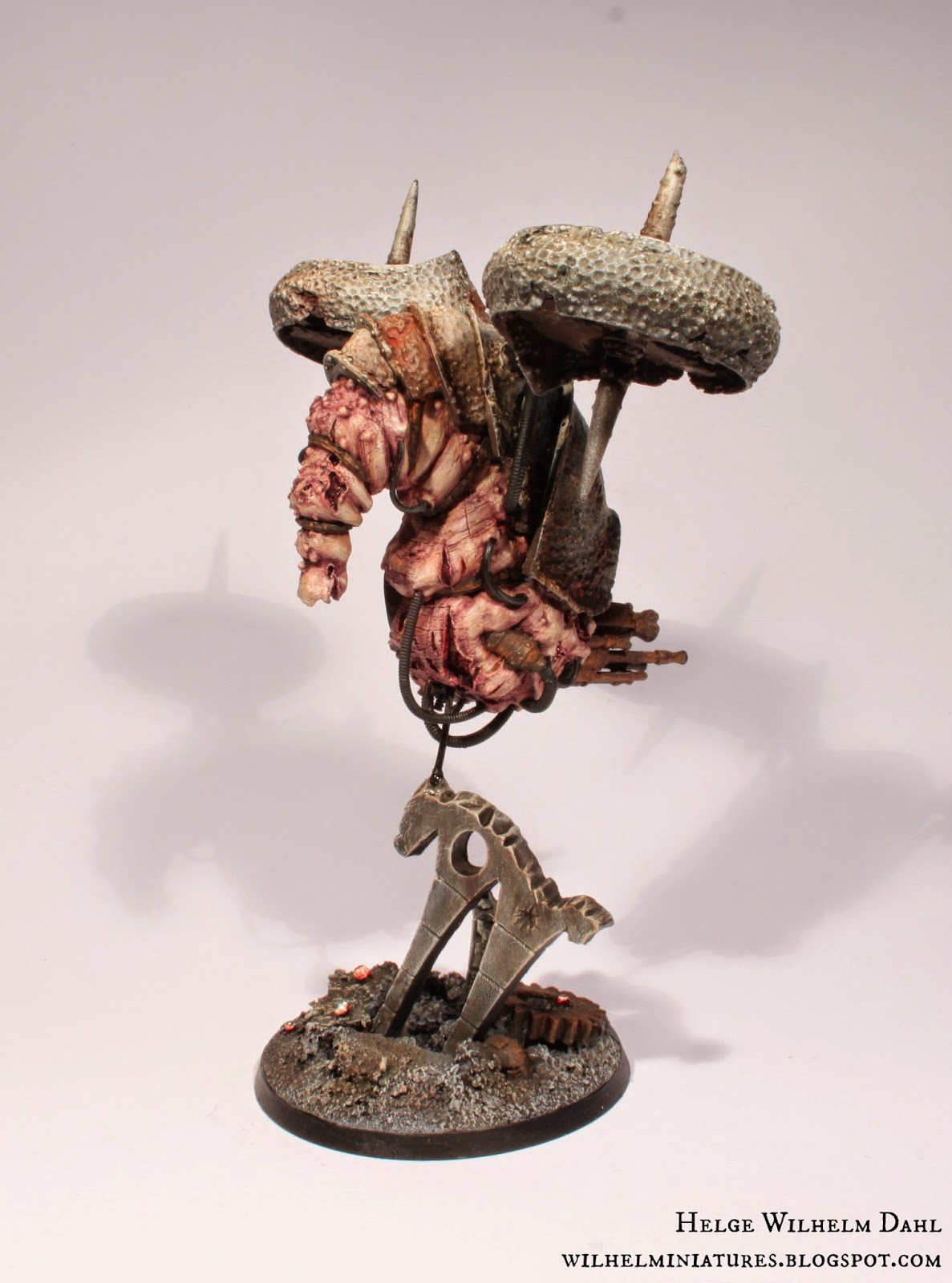 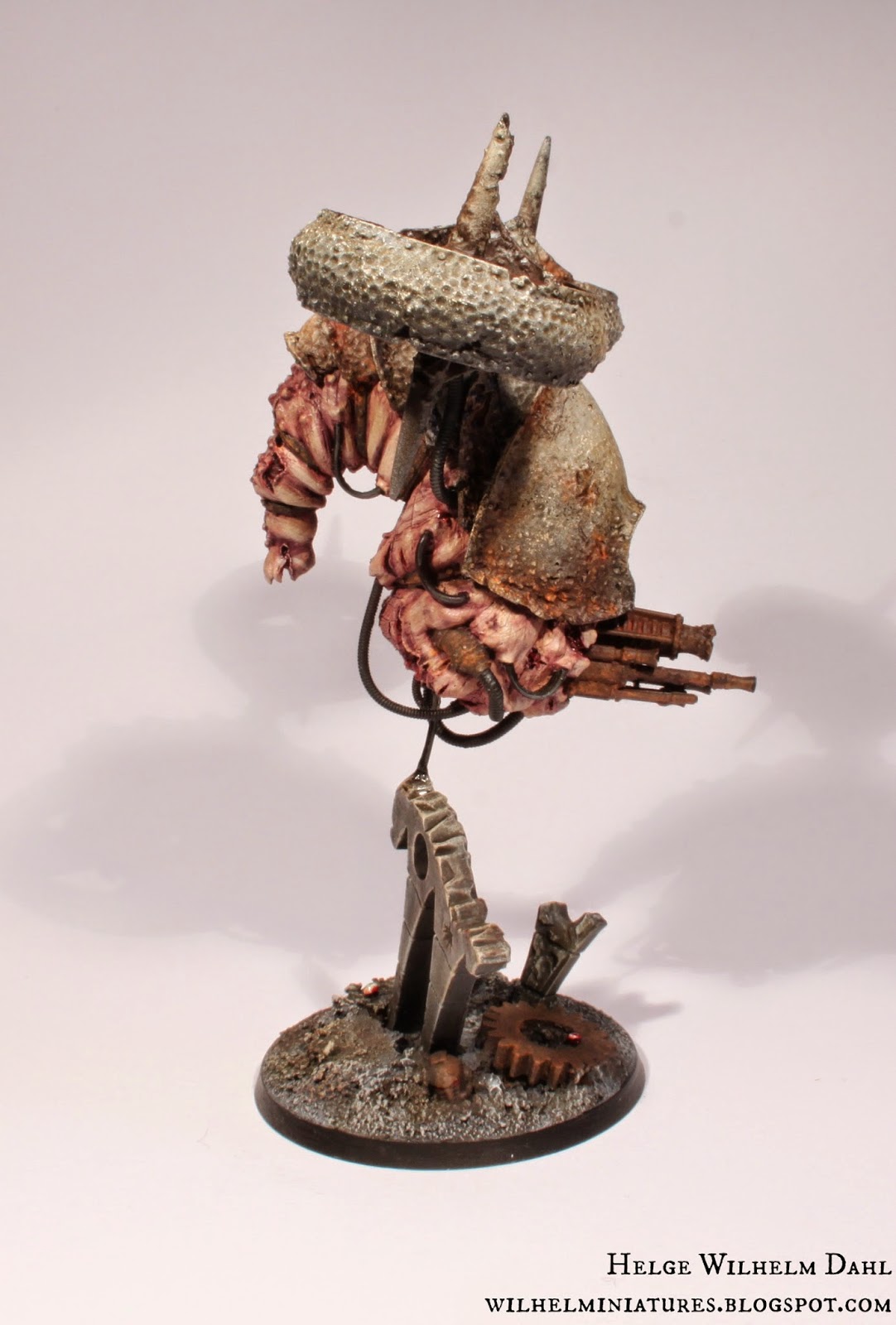 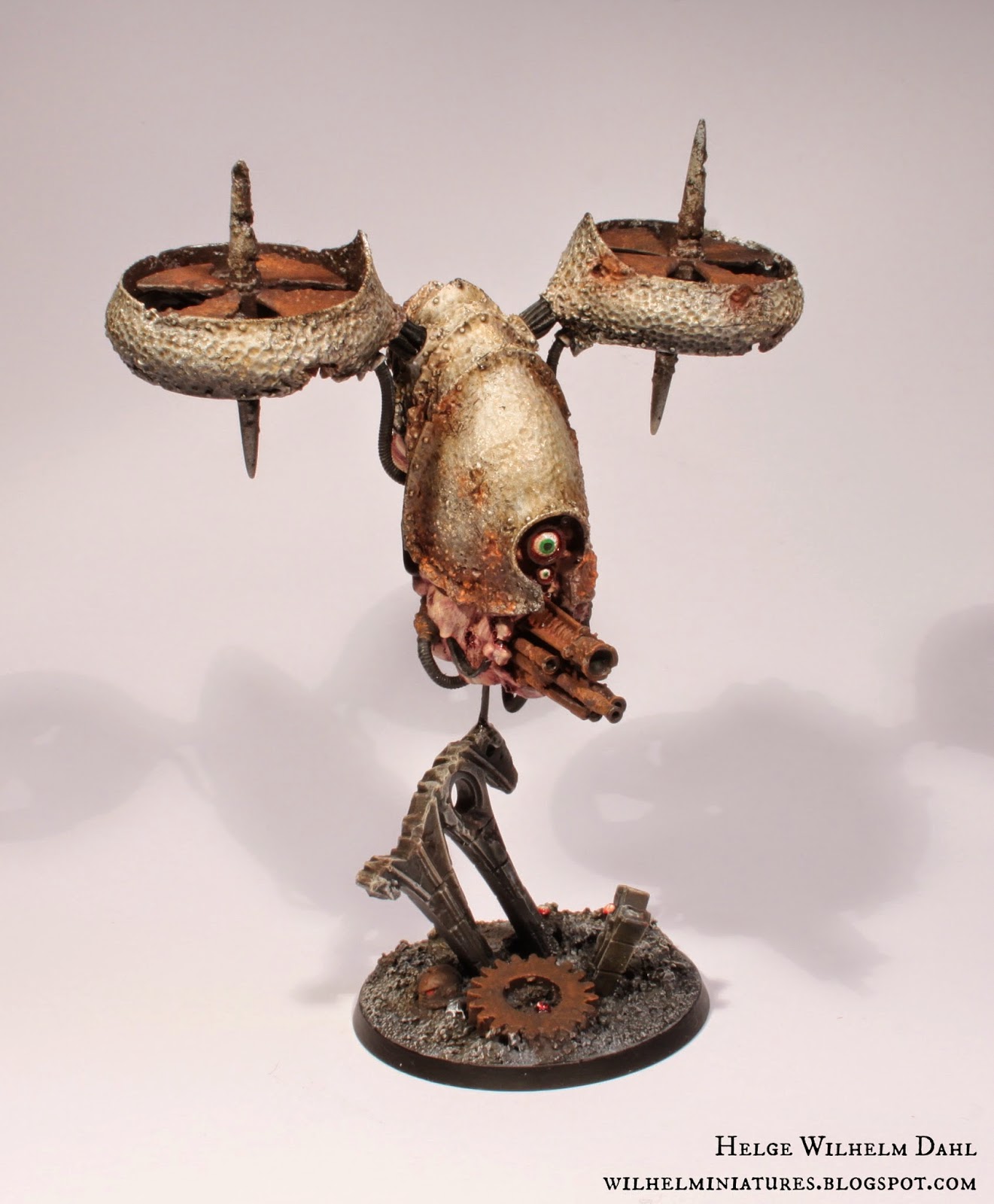