Started painting the terminators from Space Hulk a couple of weeks ago. I never really liked Blood Angels, so I decided to paint them as Flesh Tearers. So far the red looks good, they only need a couple of highlights to make the details stand out. This is how they look so far.

I also bought Shield of Baal: Deathstorm, so there will most likely be more Flesh Tearers in the future.
Posted by Wilhelm at 09:45 2 comments:

Angron, Primarch of the World Eaters 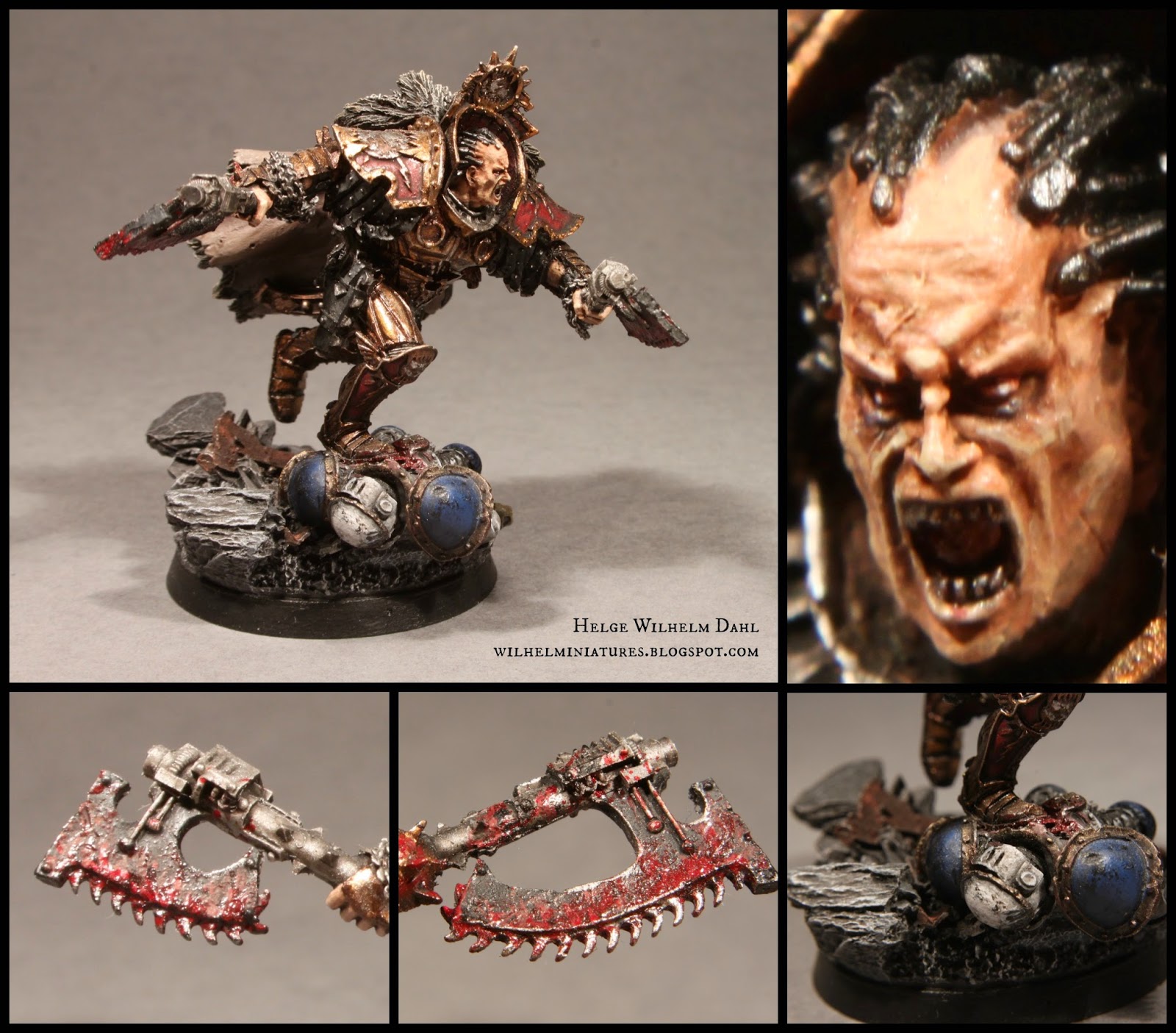 Angron has been done for a while now, and I finally managed to get some usable pictures of him. I've tried a couple of times before, but was never happy with the photos.

I enjoyed painting this model, especially the face was fun to paint. I painted his teeth in a metallic colour, to make him appear more like he is described in the Horus Hereay books.

No convert was done on this model, so it's not much more to tell. Enjoy the pictures! 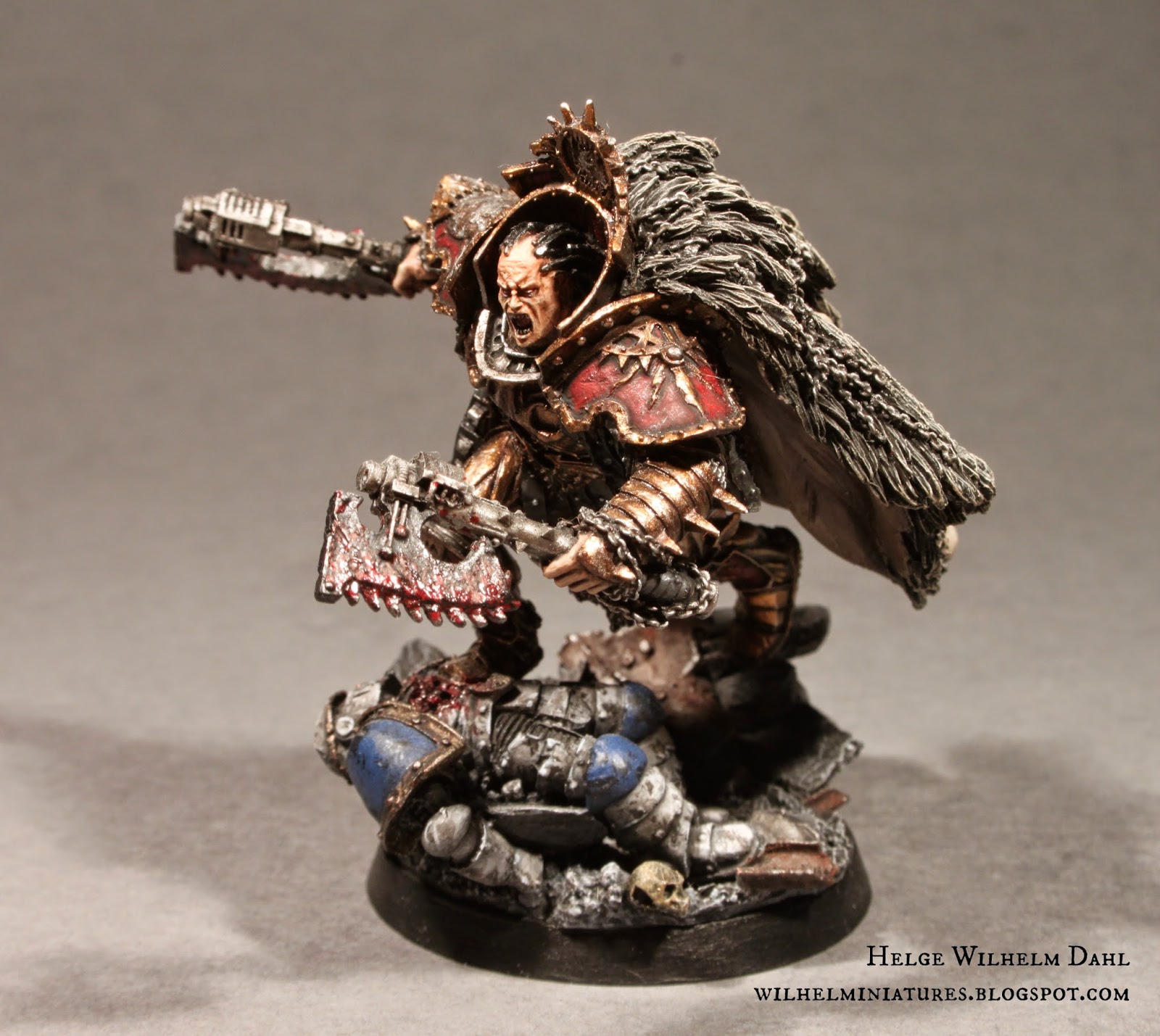 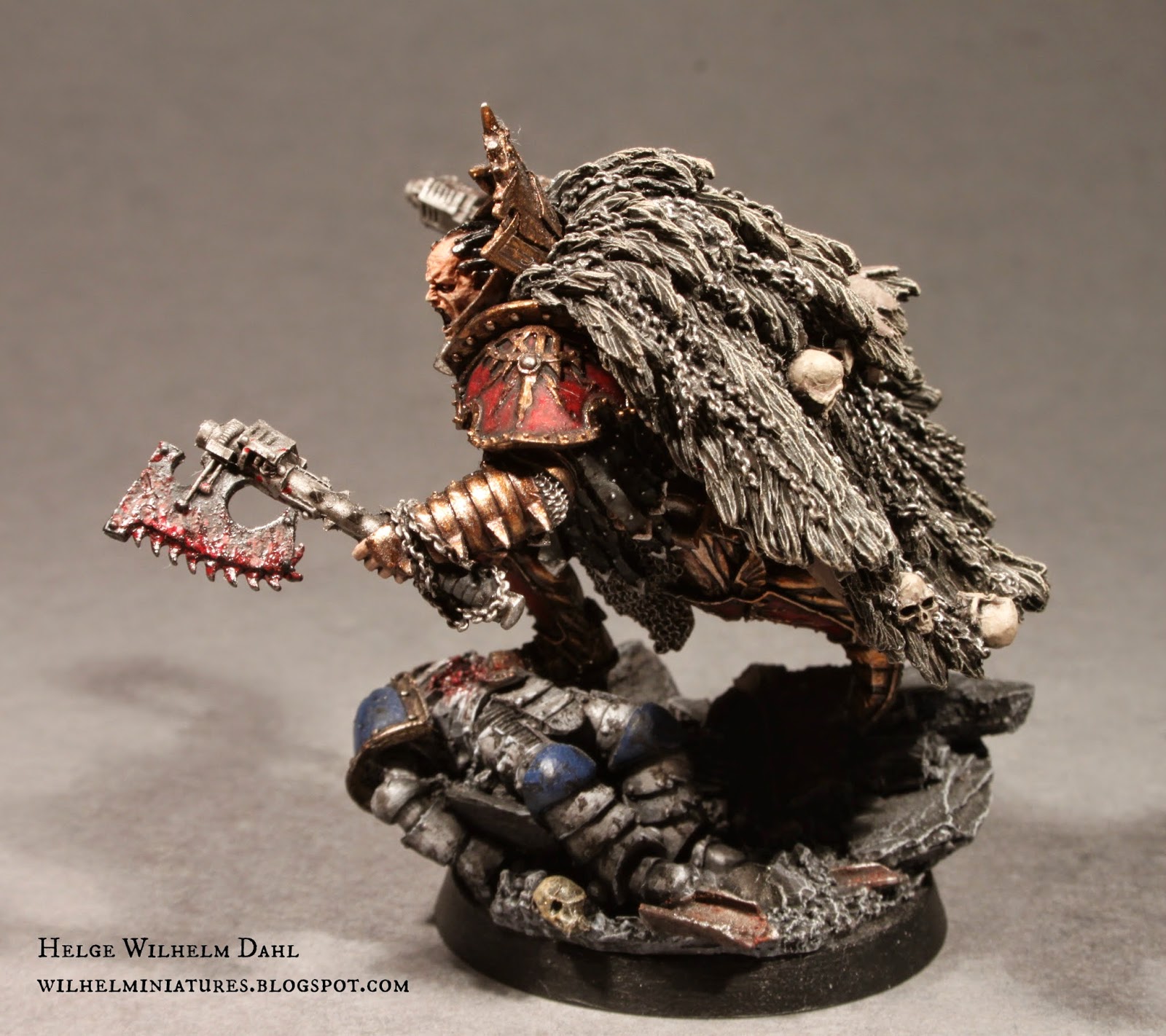 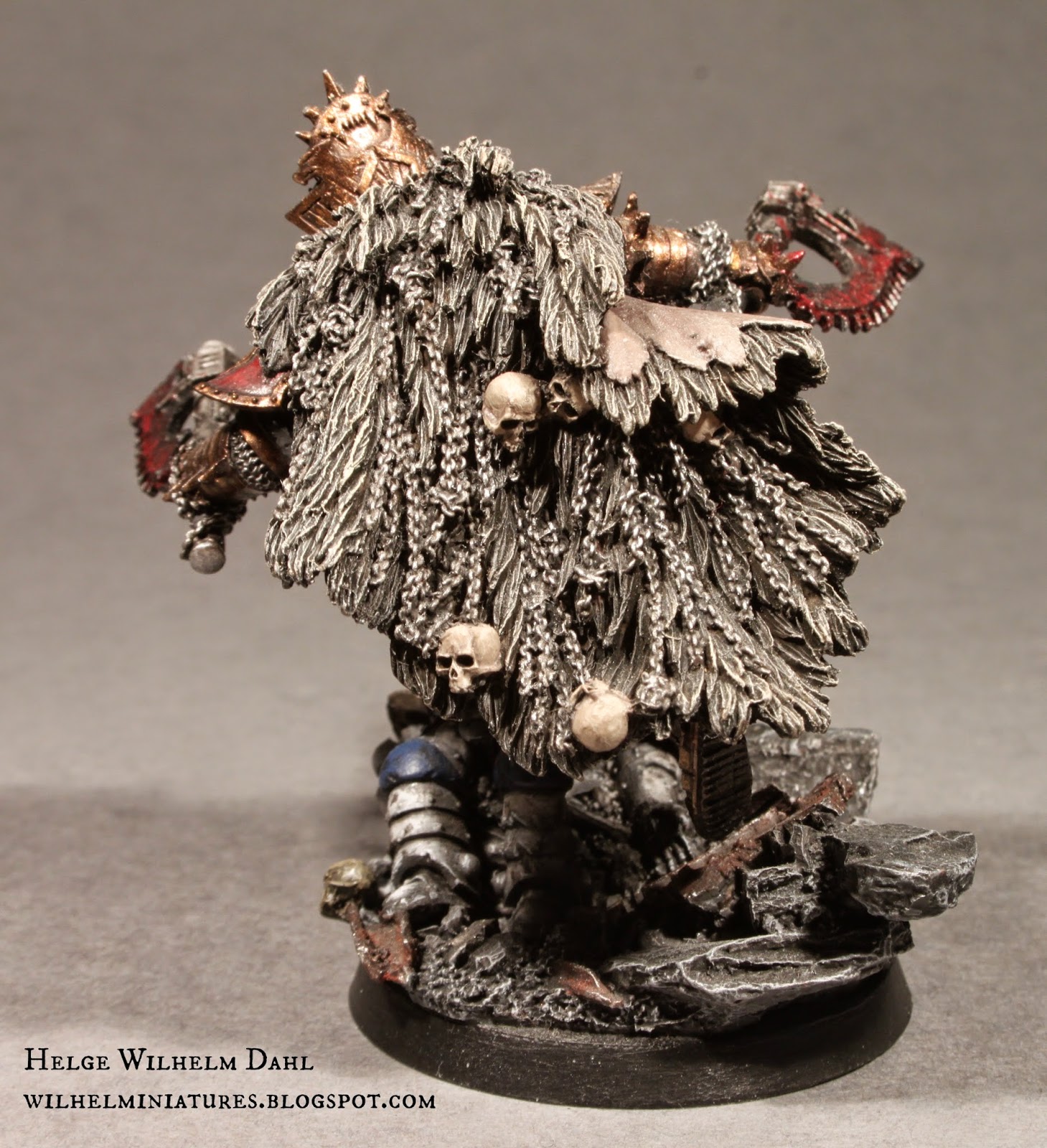 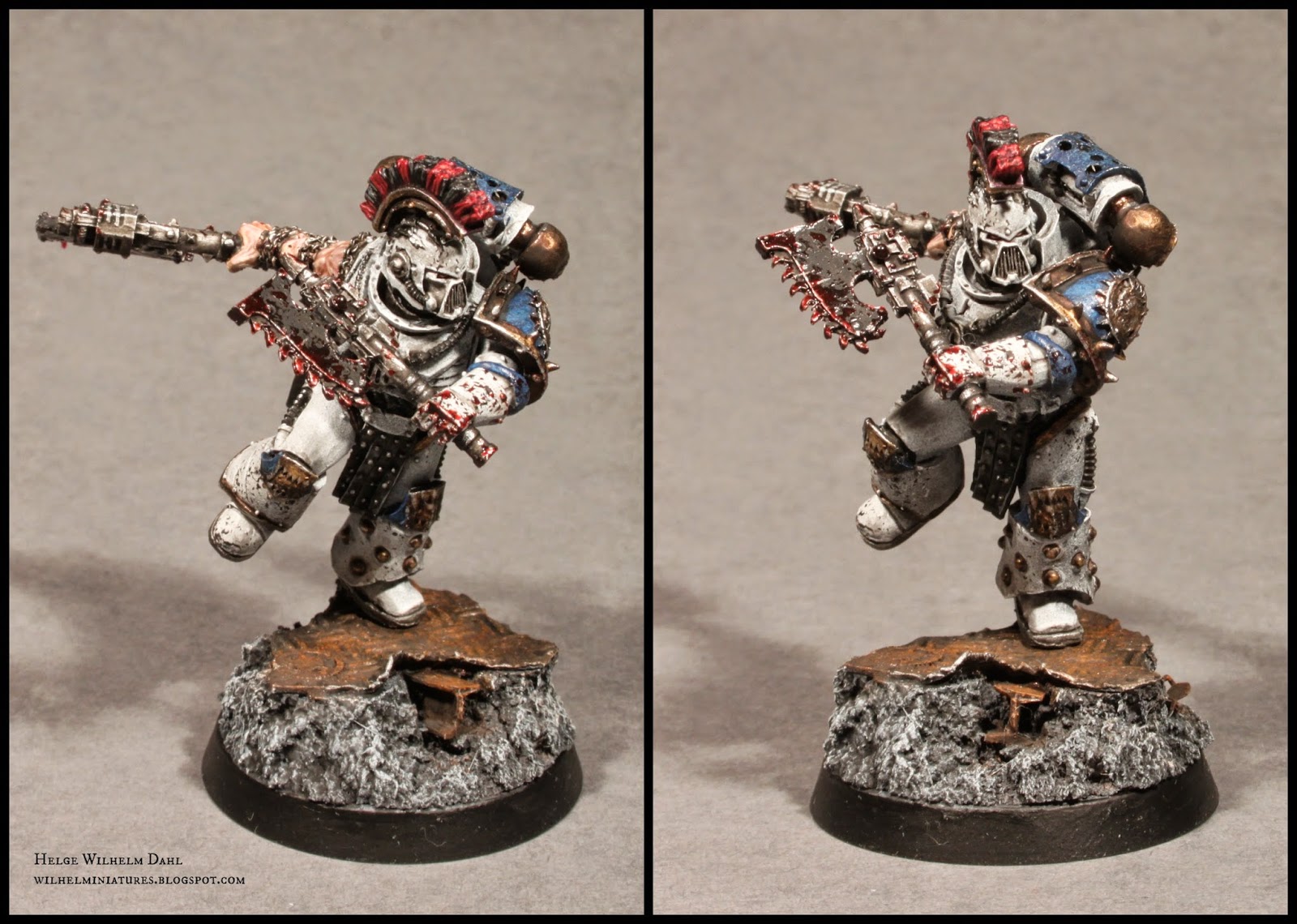 I just finished Forge World's Kharn the bloody. When first seeing the model I felt something about the pose was a bit weird. His left arm, holding the plasma-pistol, was pointing downward. This didn't look right when his right leg is pointing away from his body. It somehow looked like he was thrown of balance. I fixed this by giving him a new arm  pointing the same way as the leg, making his motion look more realistic.

Giving him another axe, made him look a lot more brutal. The crest was added to make him look more like the descriptions and artworks of Kharn during the Horus Heresy. 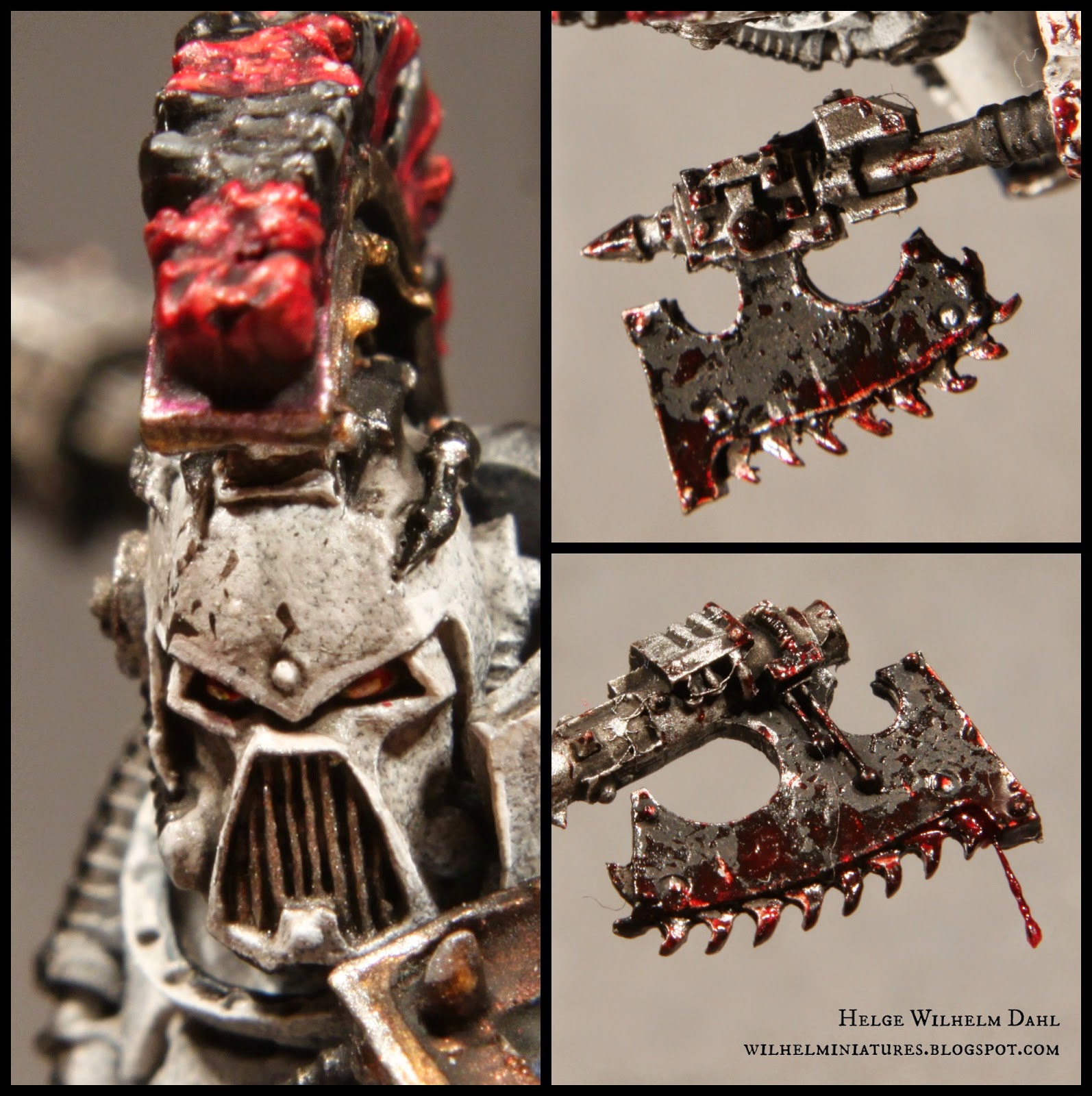 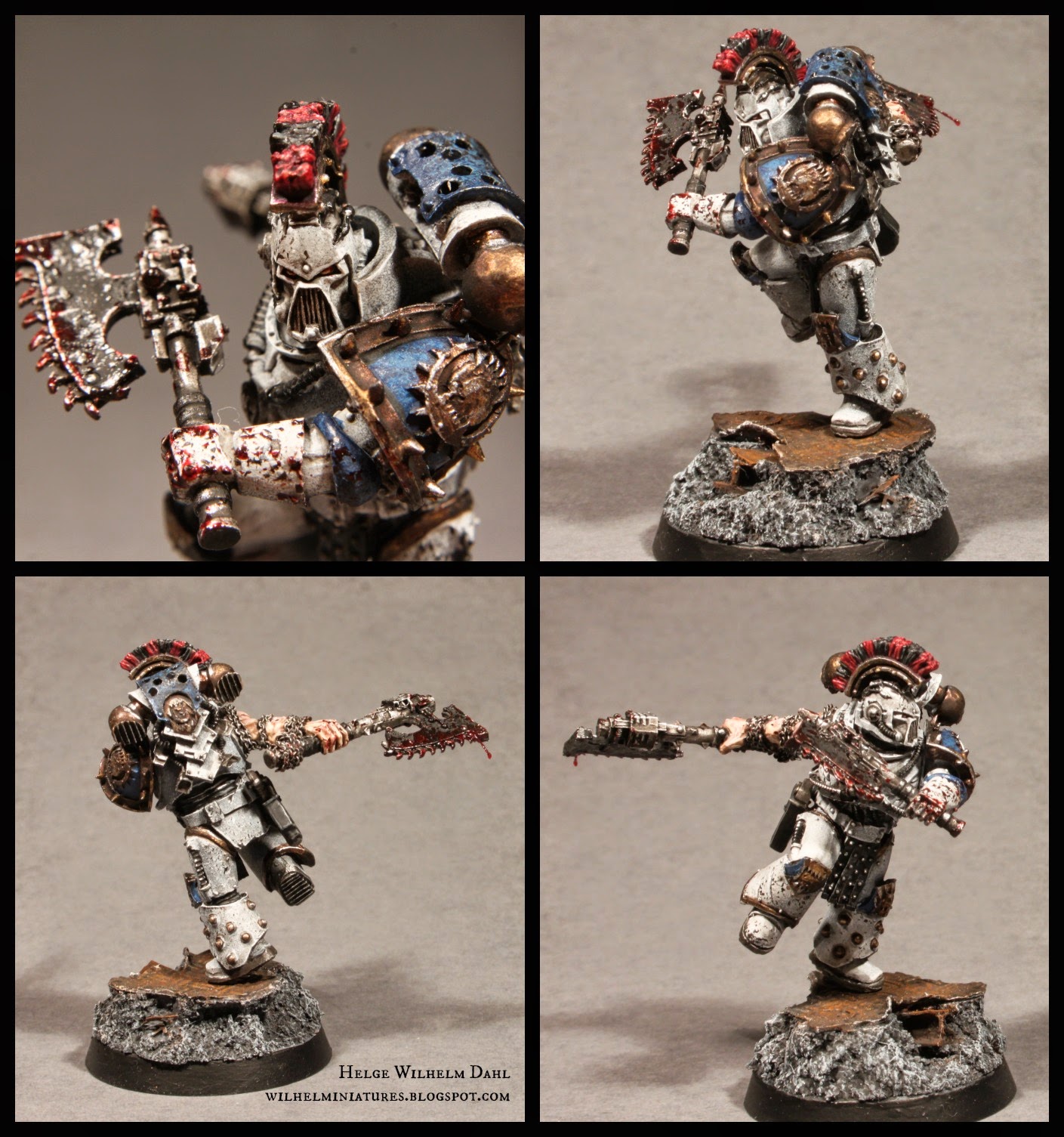 A new year leads to a new army (and a lot of other projects). When GW began the End Times series for Warhammer Fantasy, I thought it was about time to start a fantasy army. I've never done fantasy before, so it's going to be exciting. I enjoy painting Nurgle-stuff more than anything else, so i decided to start a Nurgle Warriors of Chaos army.

This is what I've put together so far. The metal model is actually a Games Day 2010 limited Chaos Sorcerer with a new head. Green-stuff will be added. 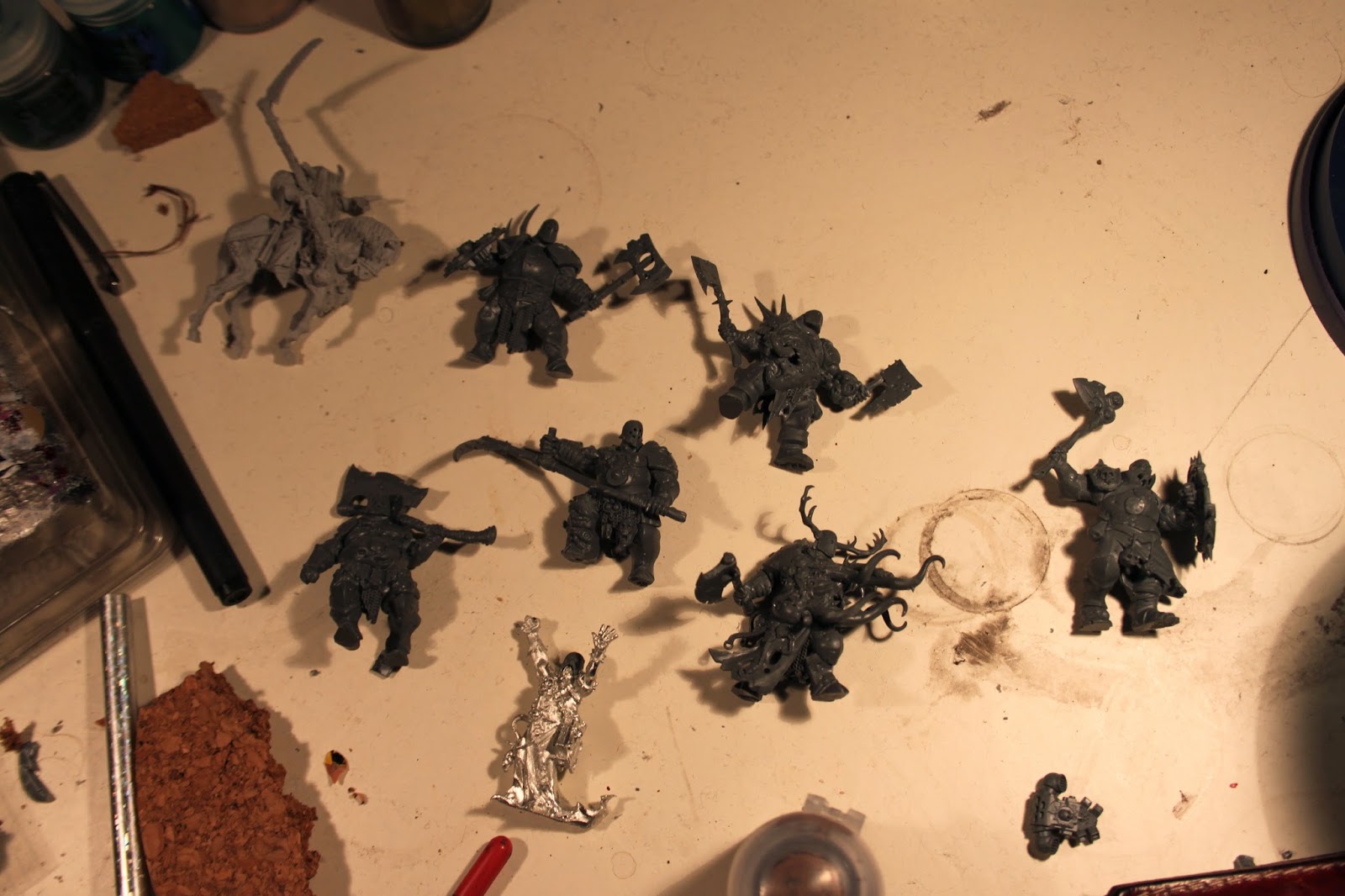 Another new project I've started recently, is another Great Unclean One from Forge World. I enjoyed painting the first one so much that I had to do another. I gave it a new weapon, and a slimy split snake-tounge. The axe is from The Lord of Skulls. I filed it down, and added some Argellan Earth to give it a cracked and rusted appearance. I also carved a hole in it and added some small gears from an old watch, to show the machinery within. The conversion is still a work in progress. 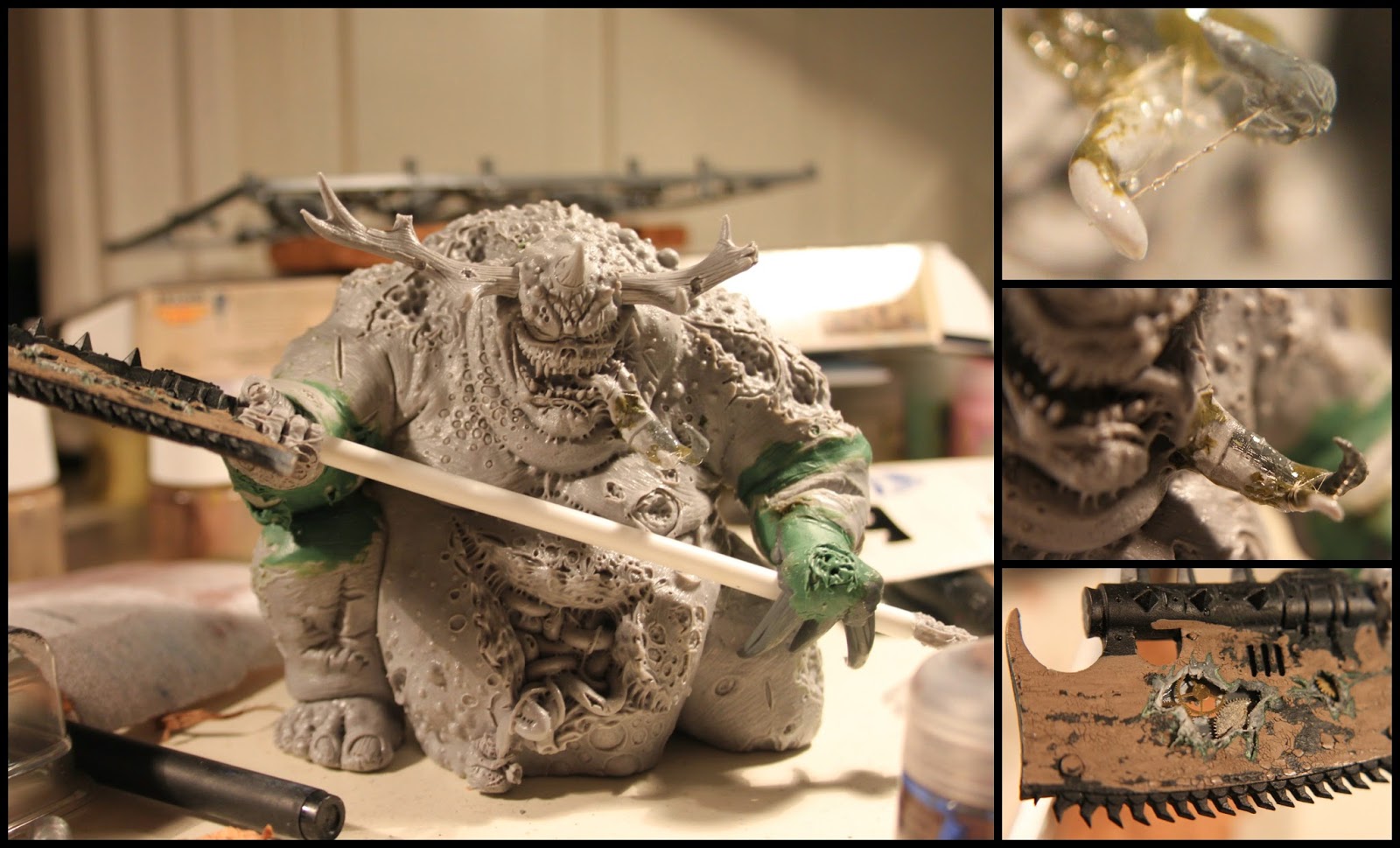 Lastly, I have to say that the army of Heresy-era World Eater haven't died, it just had a little break. Kharn and a squad of berserkers are on the way. 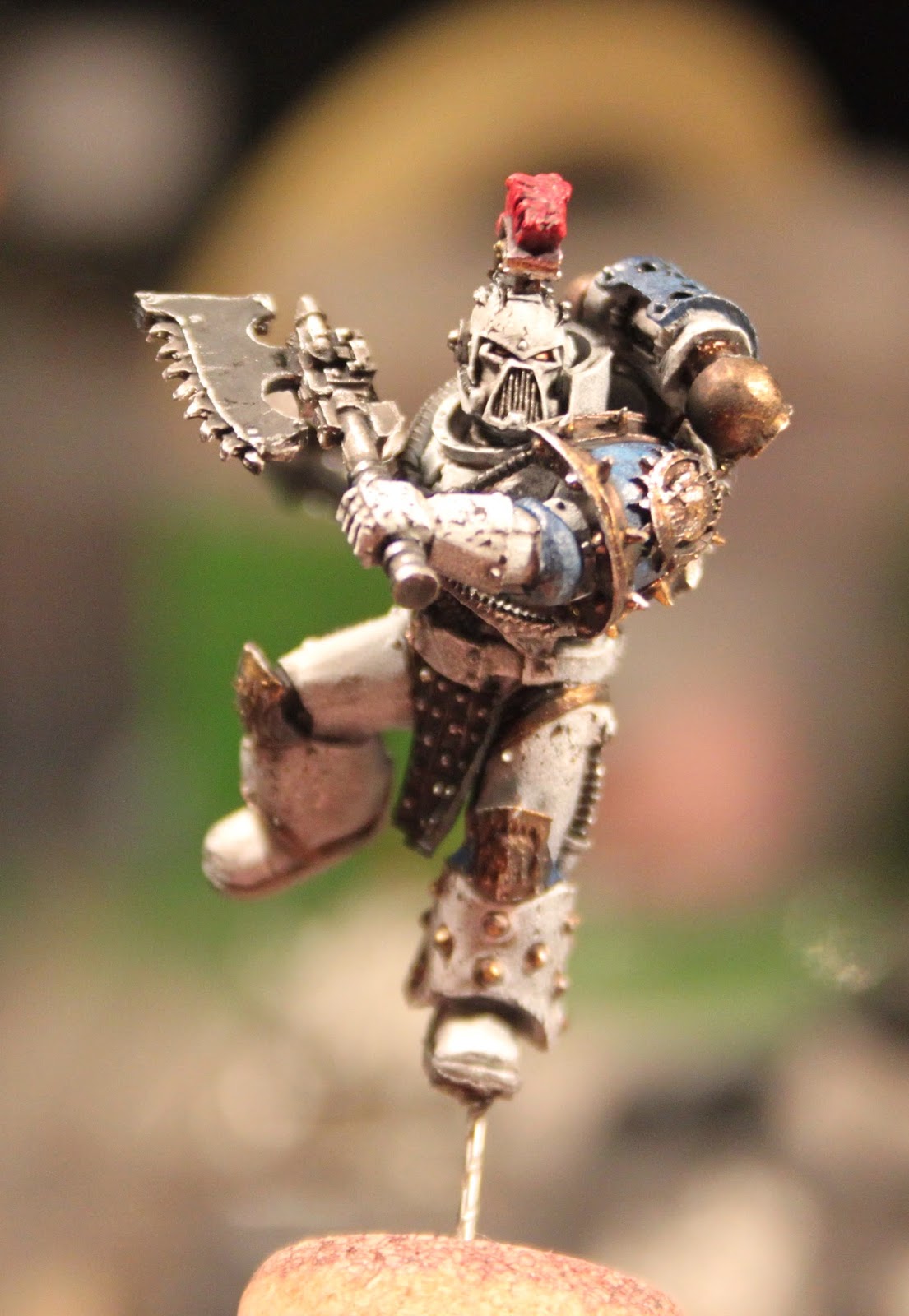 Happy New year everyone. I'm back from a long Christmas holiday.

Here is a quick update of my Nurgle warband, a squad of Cultists. I wanted the Cultists to have a similar colour-scheme as the Renegade Millitia from Forge World's Siege of Vraks. I think they turned out ok, but I'm going to throw in a little red as a spot-colour for my next batch. 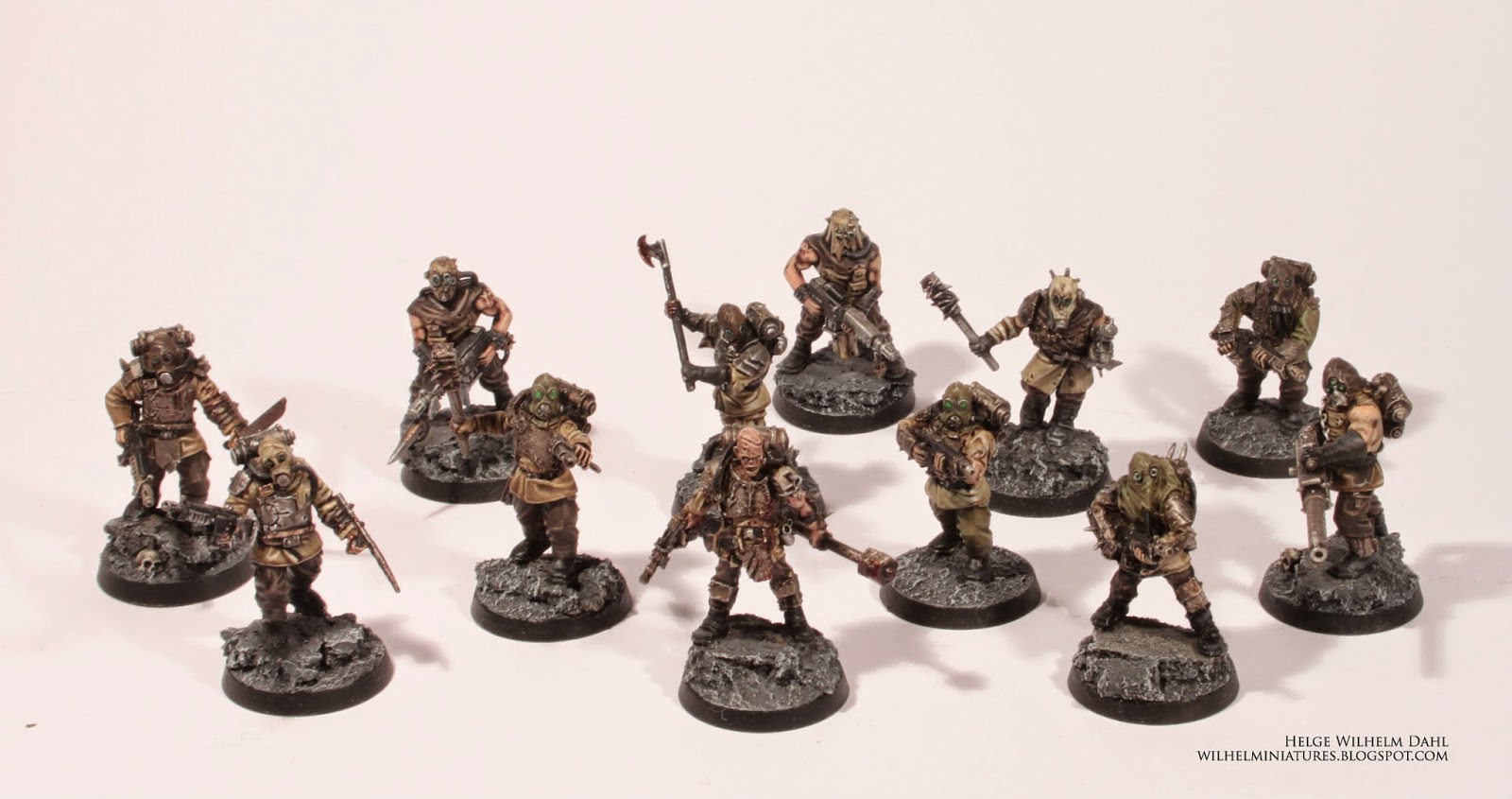 Family photo of the warband so far: 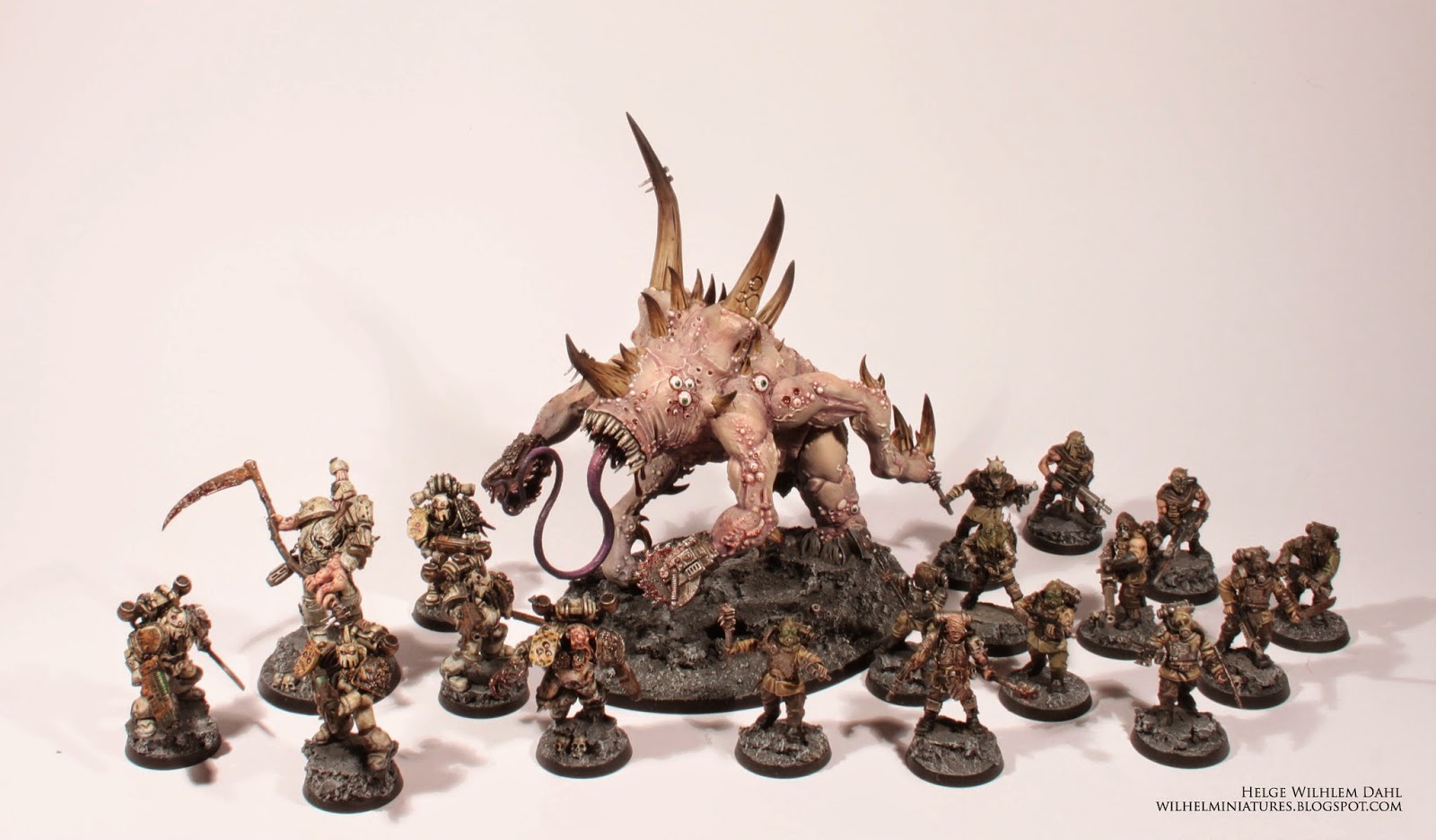