A couple of weeks ago, I purchased one of the new fantasy Maggoth Lords, to convert it into a Spined Chaos Beast of Nurgle. This is what I've done so far. I think that the conversion turned out nice, and the skin-colour is starting to get a nice tone.
More updates will follow. 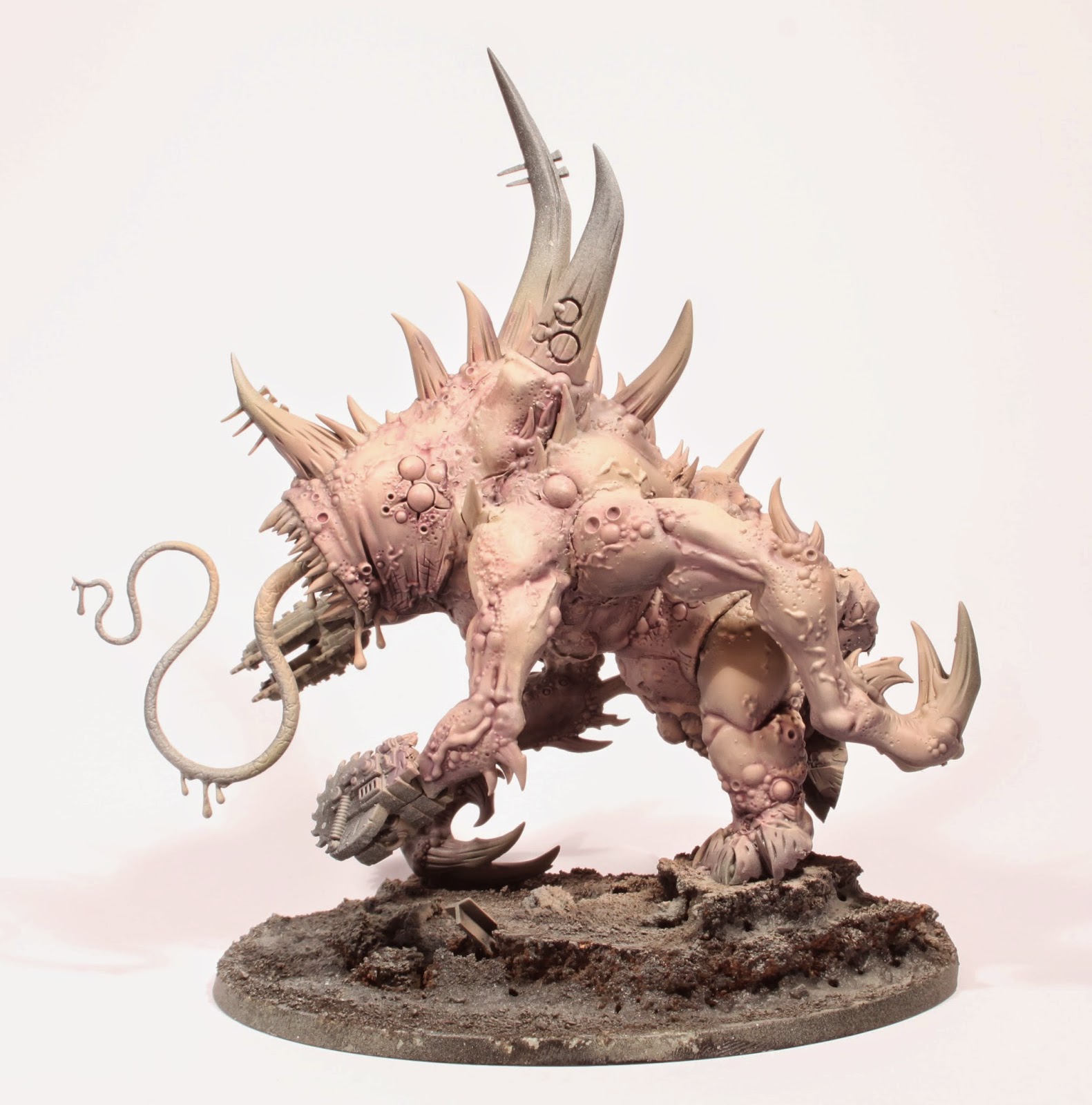 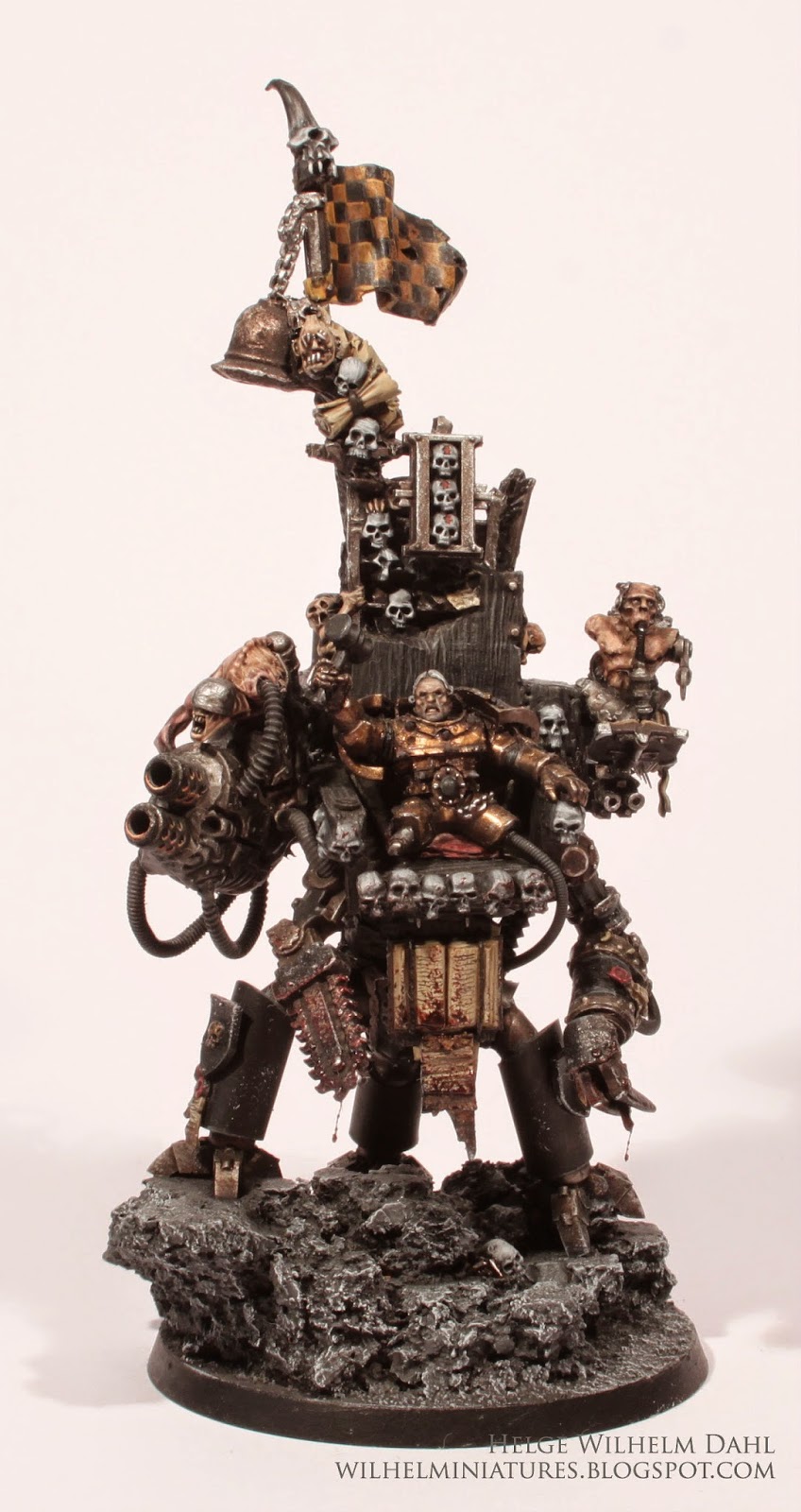 First I want to share another picture of my Inquisitor Lord on walking throne. Last time, I did the pictures on a black background, but I wasn't quite satisfied with that. The dark background made some of the model's details hard to spot, like the blood dripping from his weapons.

I've also finished two of my crazy henchmen miniatures. They're inspired by Spyky Rat Pack's Archo Evisirators. You should check them out, they're amazing miniatures. Link: http://spikyratpack.blogspot.no/2014/04/more-arco-evisorators.html 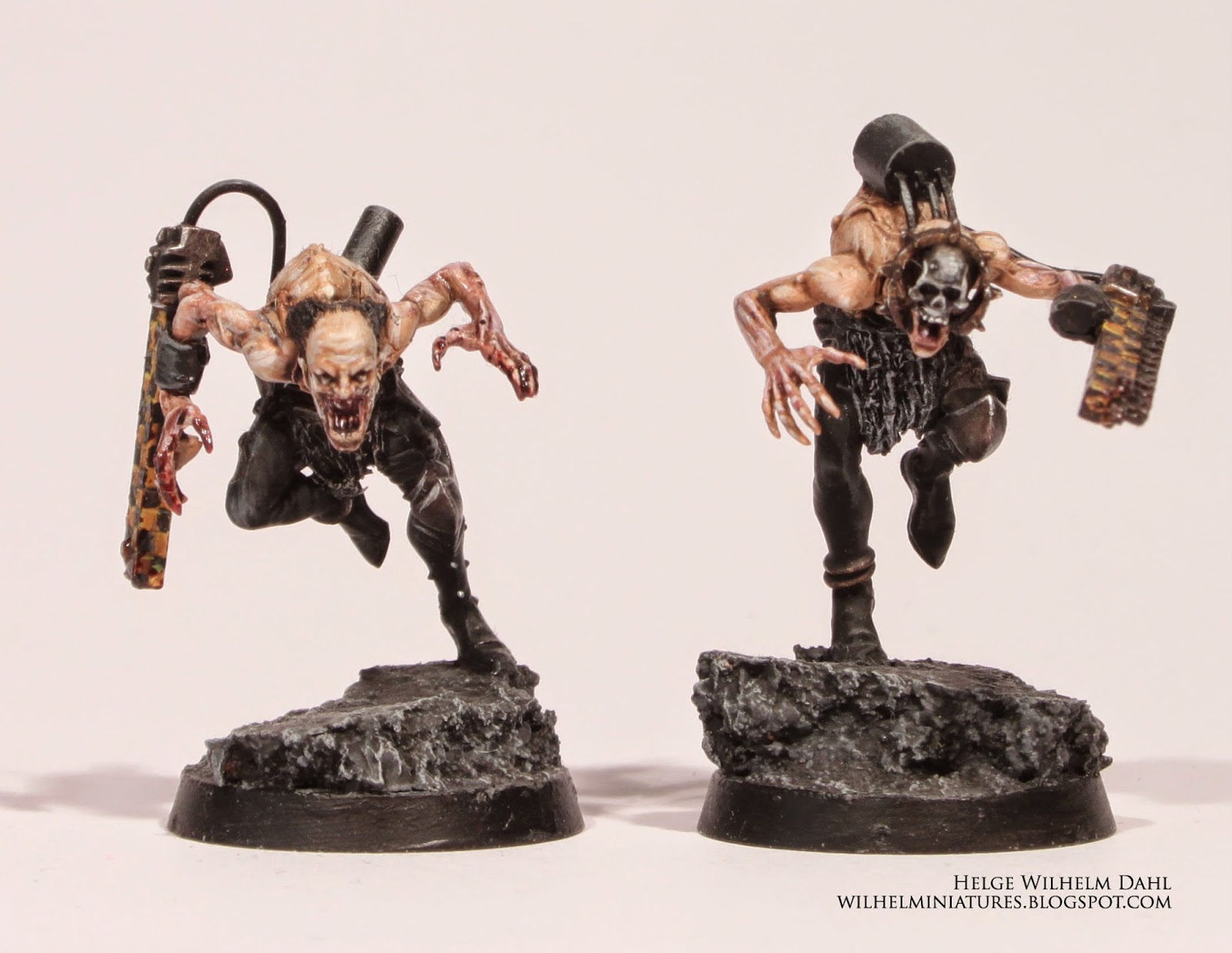 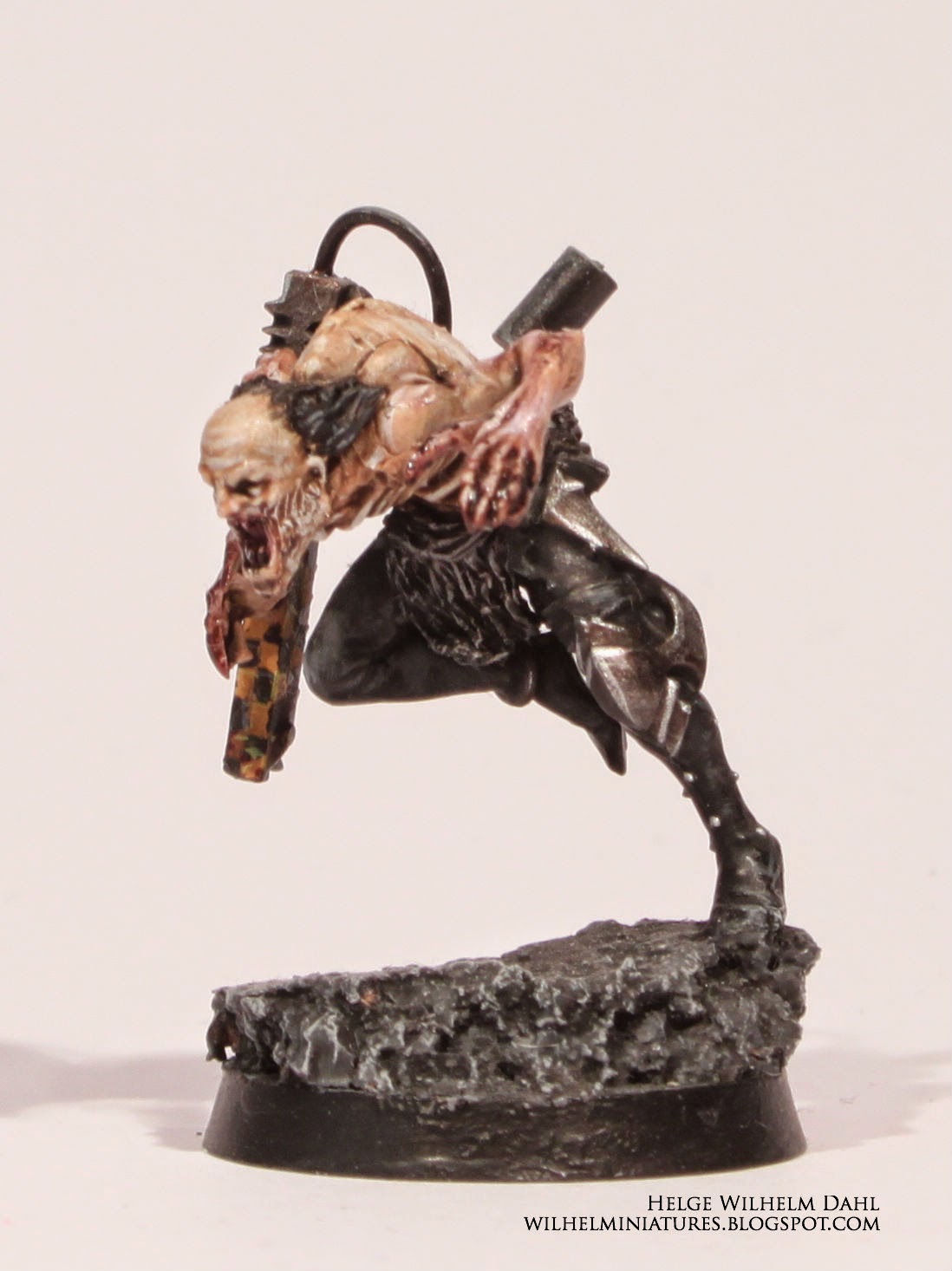 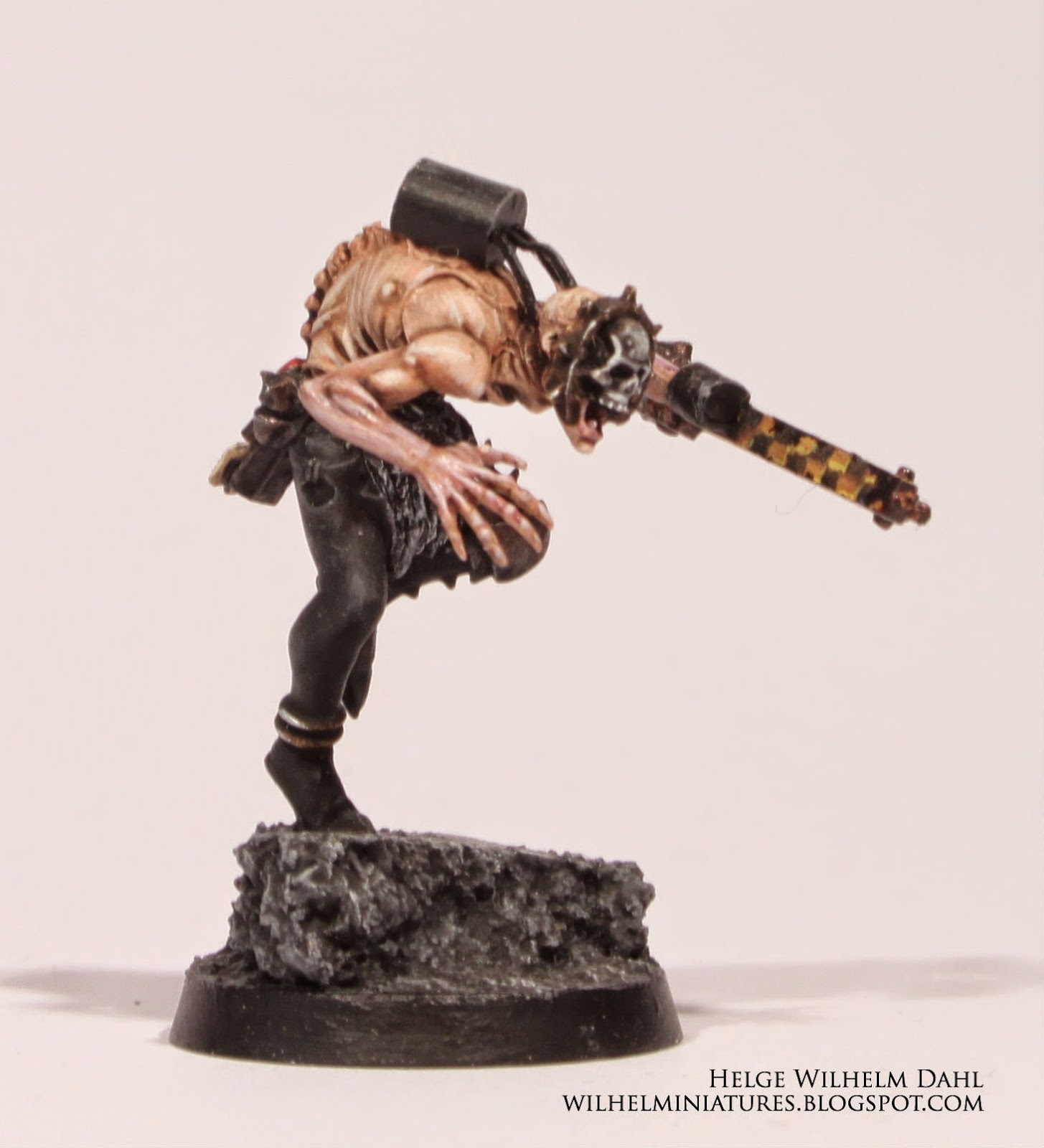 Lastly I wanted to show what I'll soon add to my collection of Inquisitor models. A WIP 'angel' model, based on the Warhammer Fantasy Witch Elves, with Dark Eldar whinges and a FW Space Marine Power Sword. I'm really happy with how her green-stuffed hair turned out. 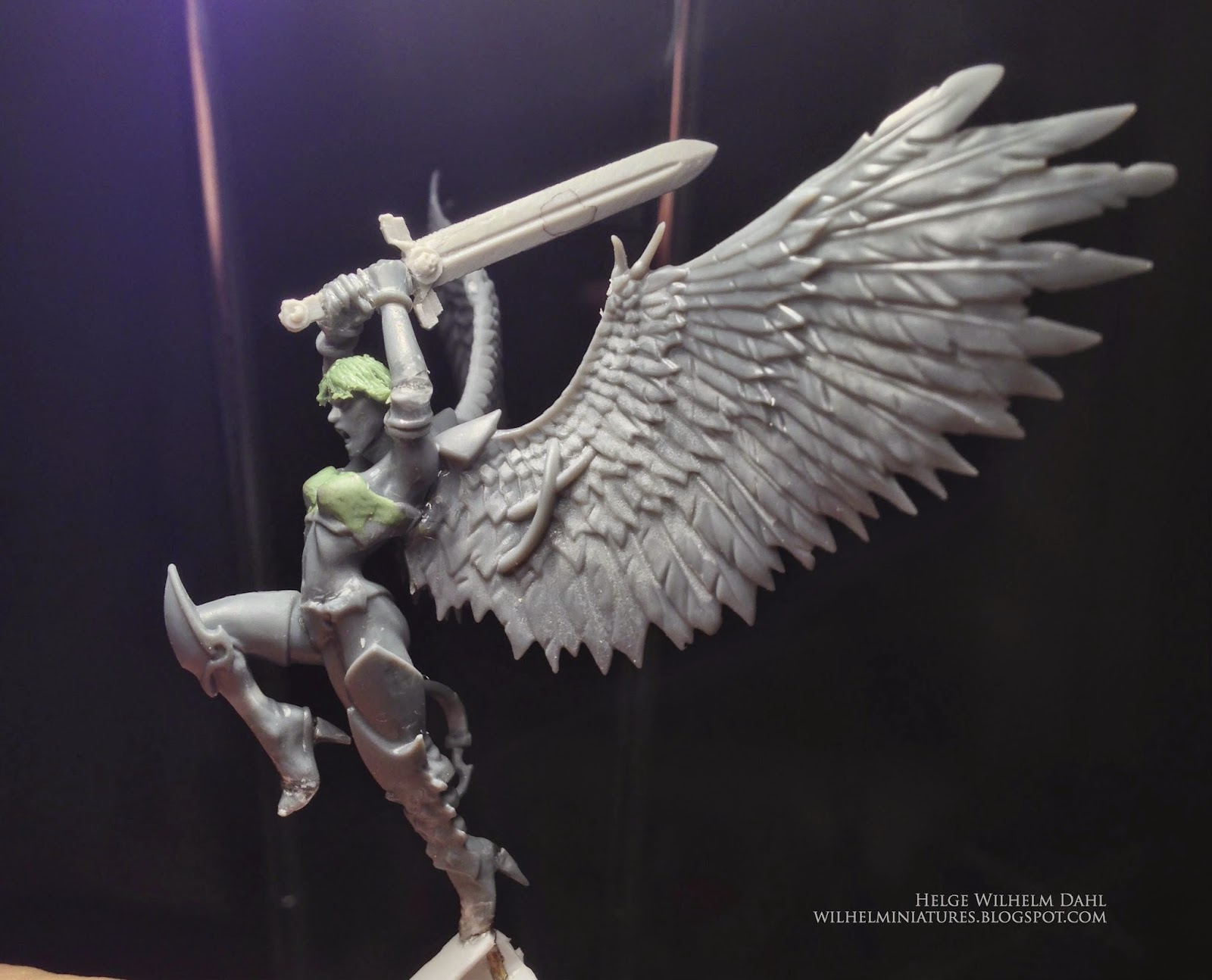 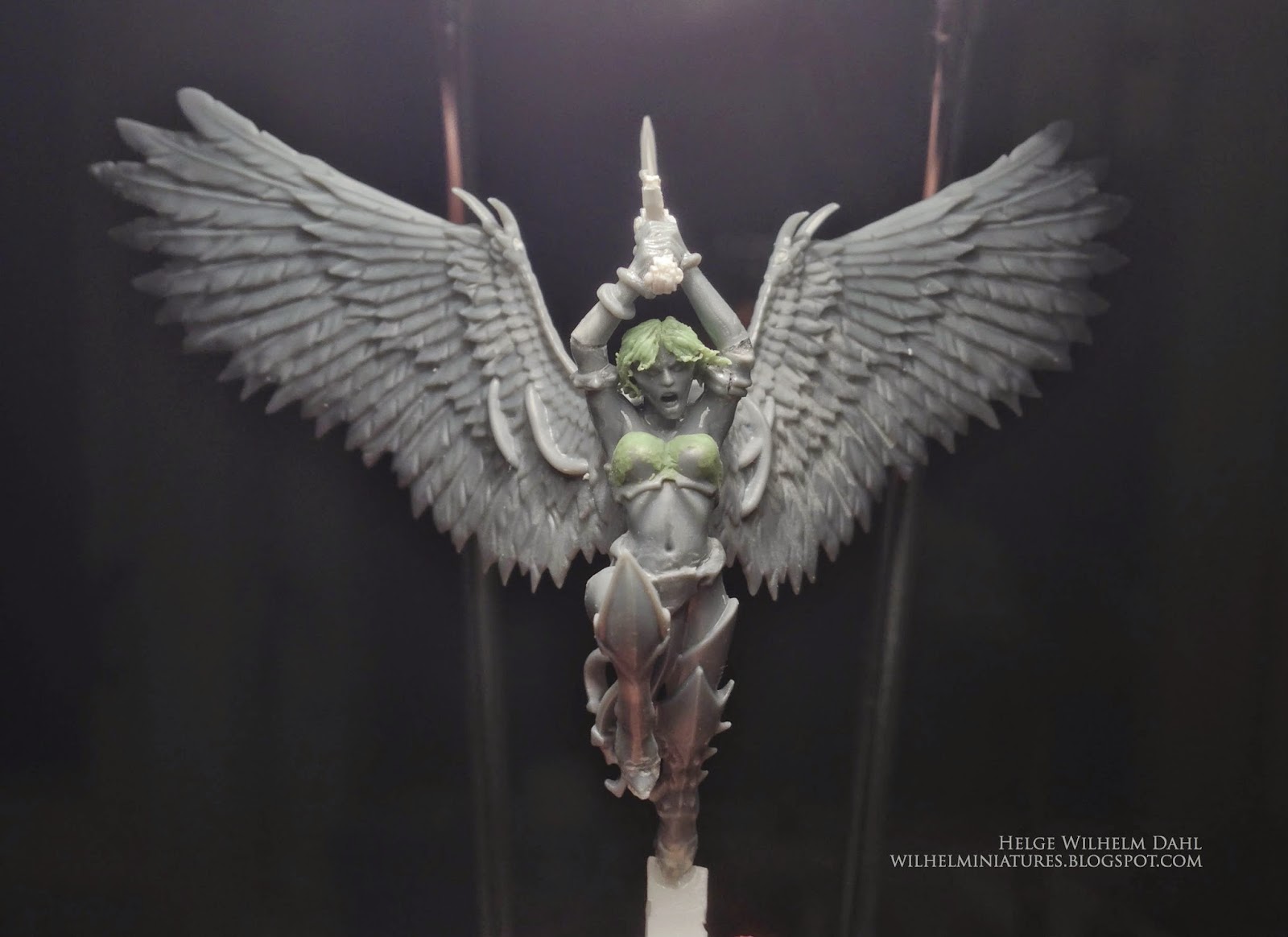 It has been almost a month since I brought Fulgrim to Golden Daemon at Warhammer Fest. It's about time I posted some pictures of him here.

As I mentioned in Fulgrim's WIP post, he is based on Forge World's Fulgrim model, with whinges from a Dark Eldar Scourge, a tale from a Sepulchral Stalker and lower arms and secondary swords from FW Palatine Blades green-stuffed into place.

The purple armour was mainly done with an airbrush, followed by darker glazes in the recesses. looking at him now, makes me regret not adding a sharp edge highlight on the armour. It look a bit flat. I am however very happy with his face, hair and the rest of the details. I blended purple in with the metal colours on his blades and eagle to blend it in with the rest of the model. His face was also shaded in deep purple colours, especially around the eyes. even though I'm not a 100% happy with the armour, I really like how the model turned out. Fulgrim is one of the best models I've painted in a while. 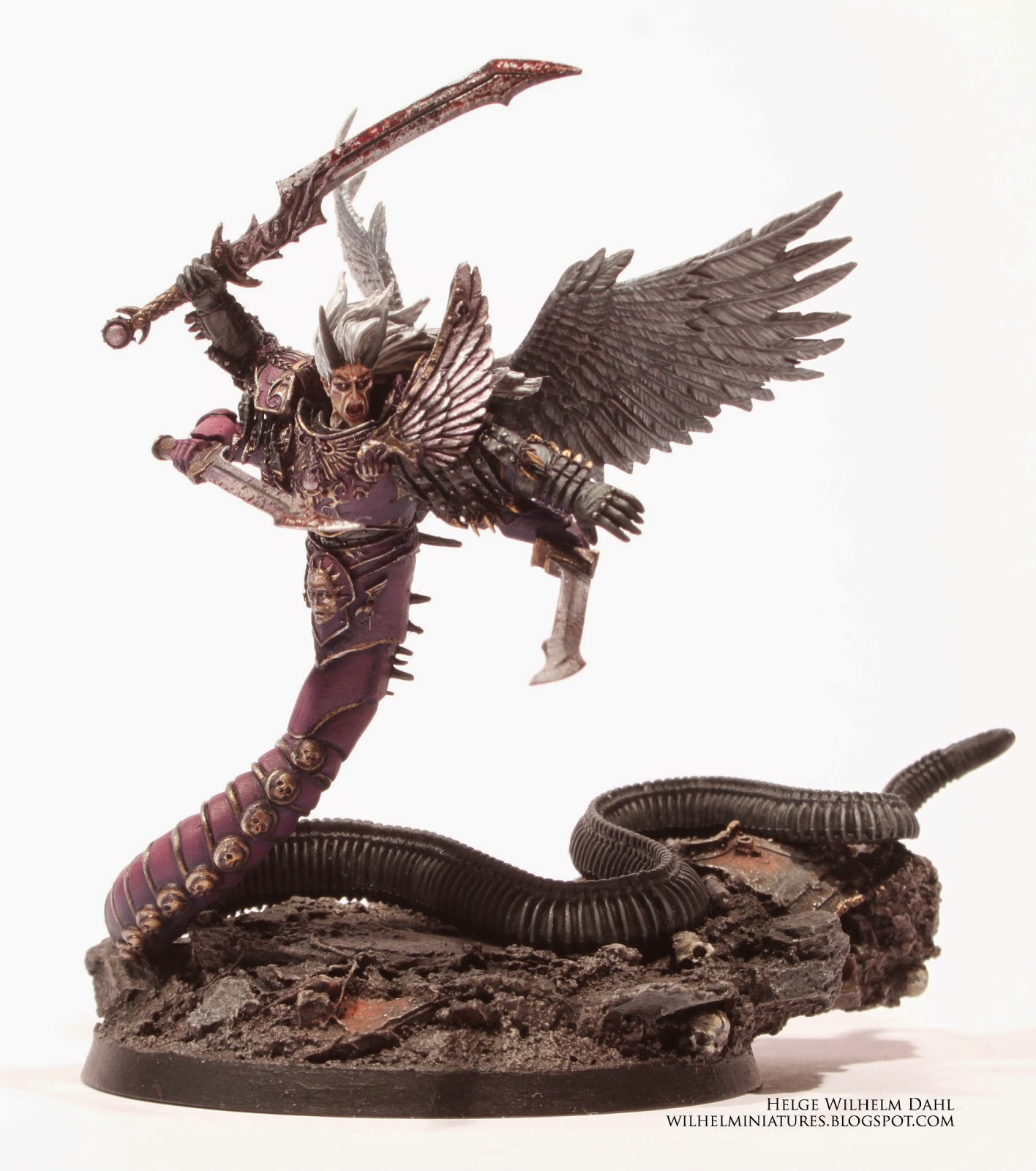 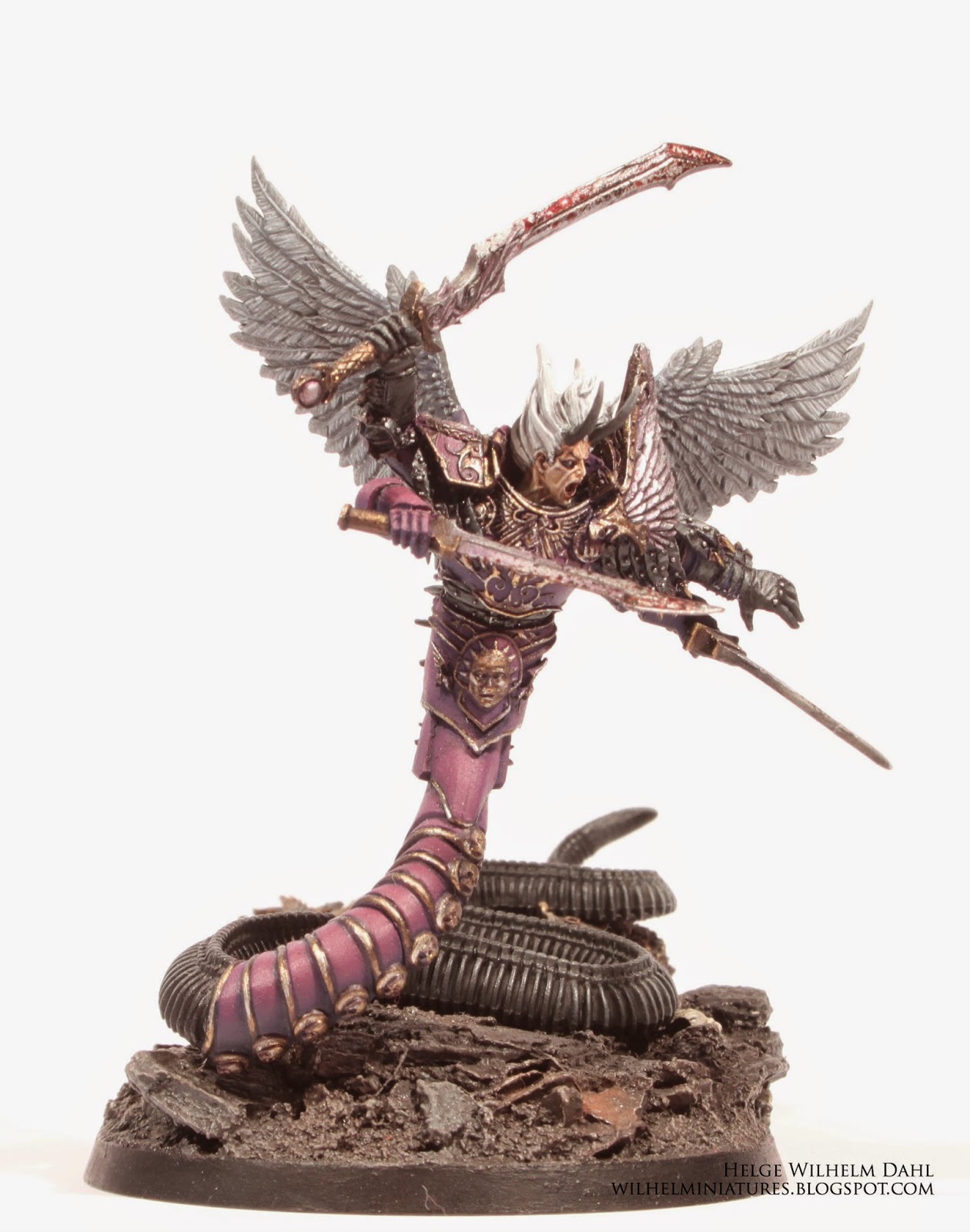 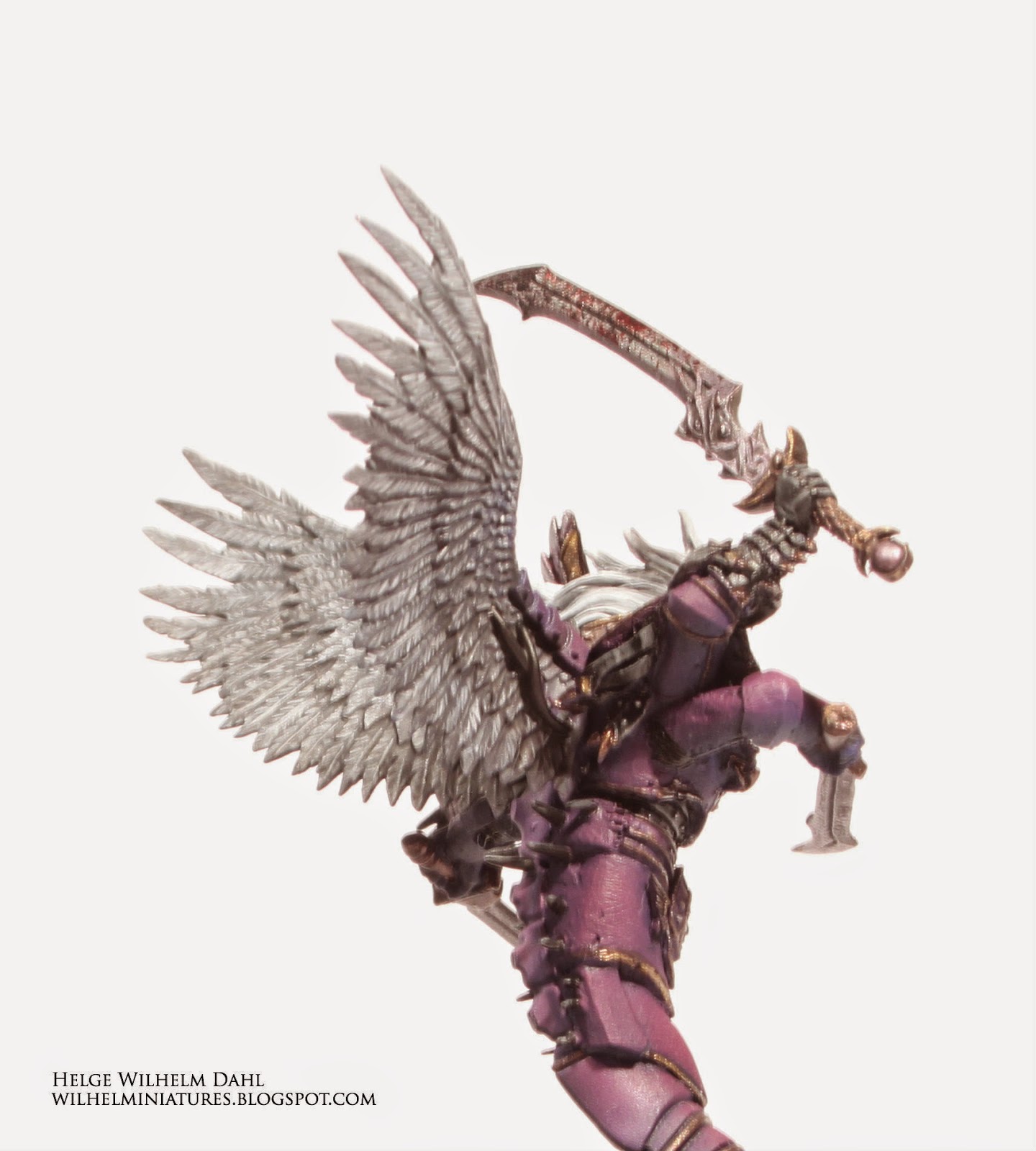 Even though this last picture is taken from an awkward angle, It really shows the details on the model's whinges and back. Note the small spikes, growing out of his lower back.

Thank you for looking!

It has been too long since I've posted anything on this blog. After Golden Daemon, I've started a lot of new projects, but haven't taken any pictures on them. I've decided to change that during this weekend. There will be a lot of model-updates soon.


I entered Golden Daemon in 2012, in 40k Monster and Vehicle category which these two Daemon Engines. It' over two years sine I painted these models, so i feel it's about time to post them here. 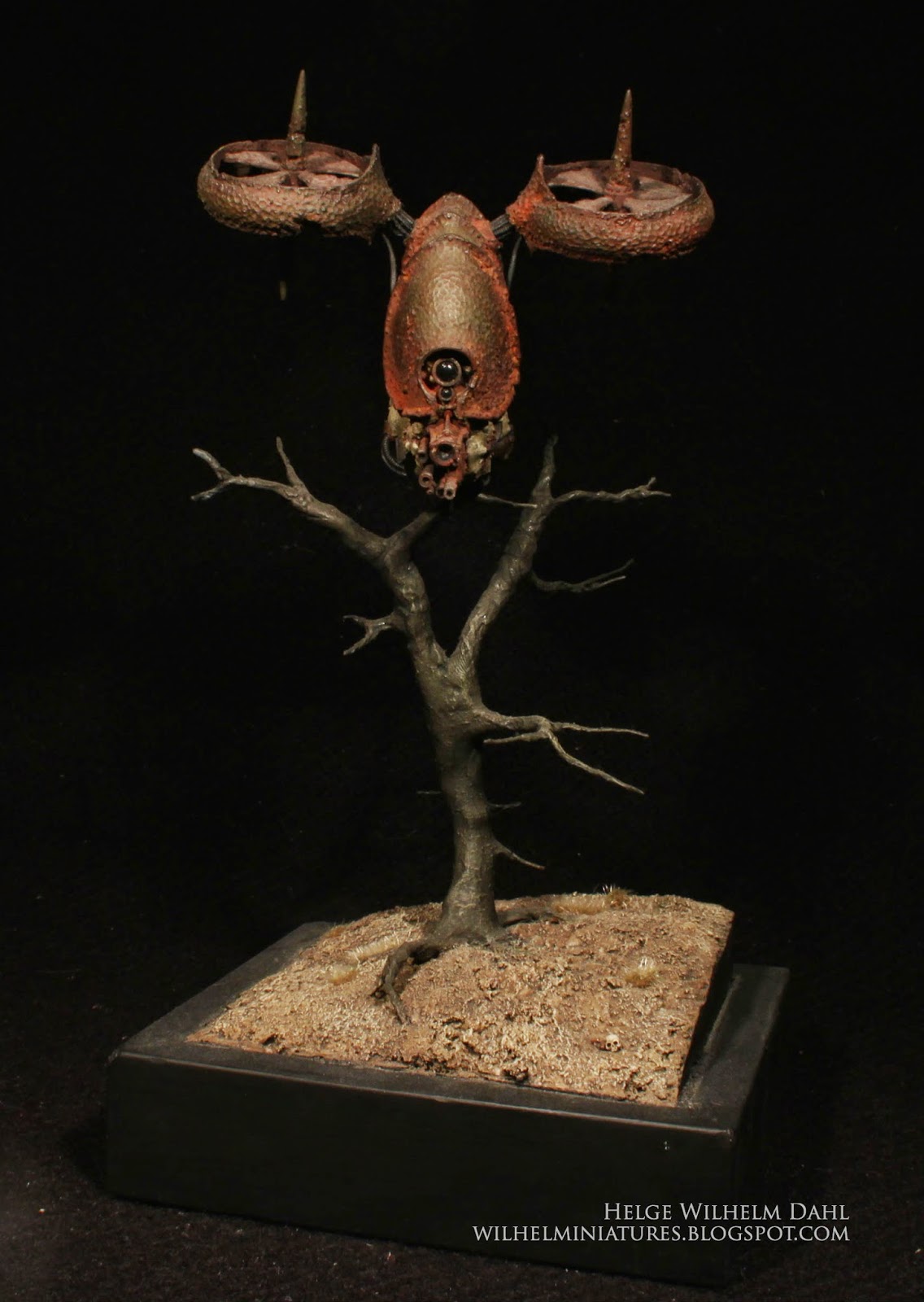 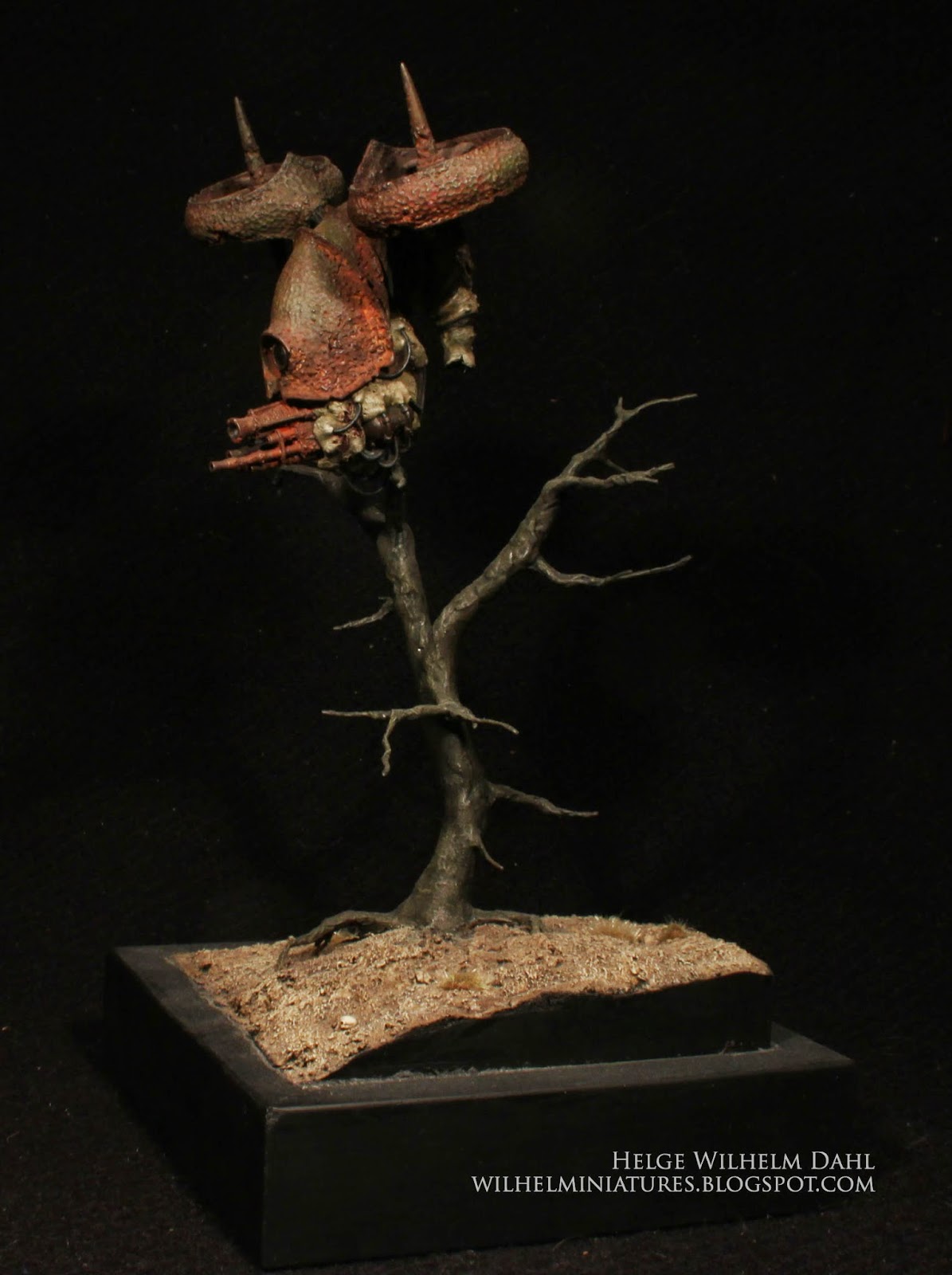 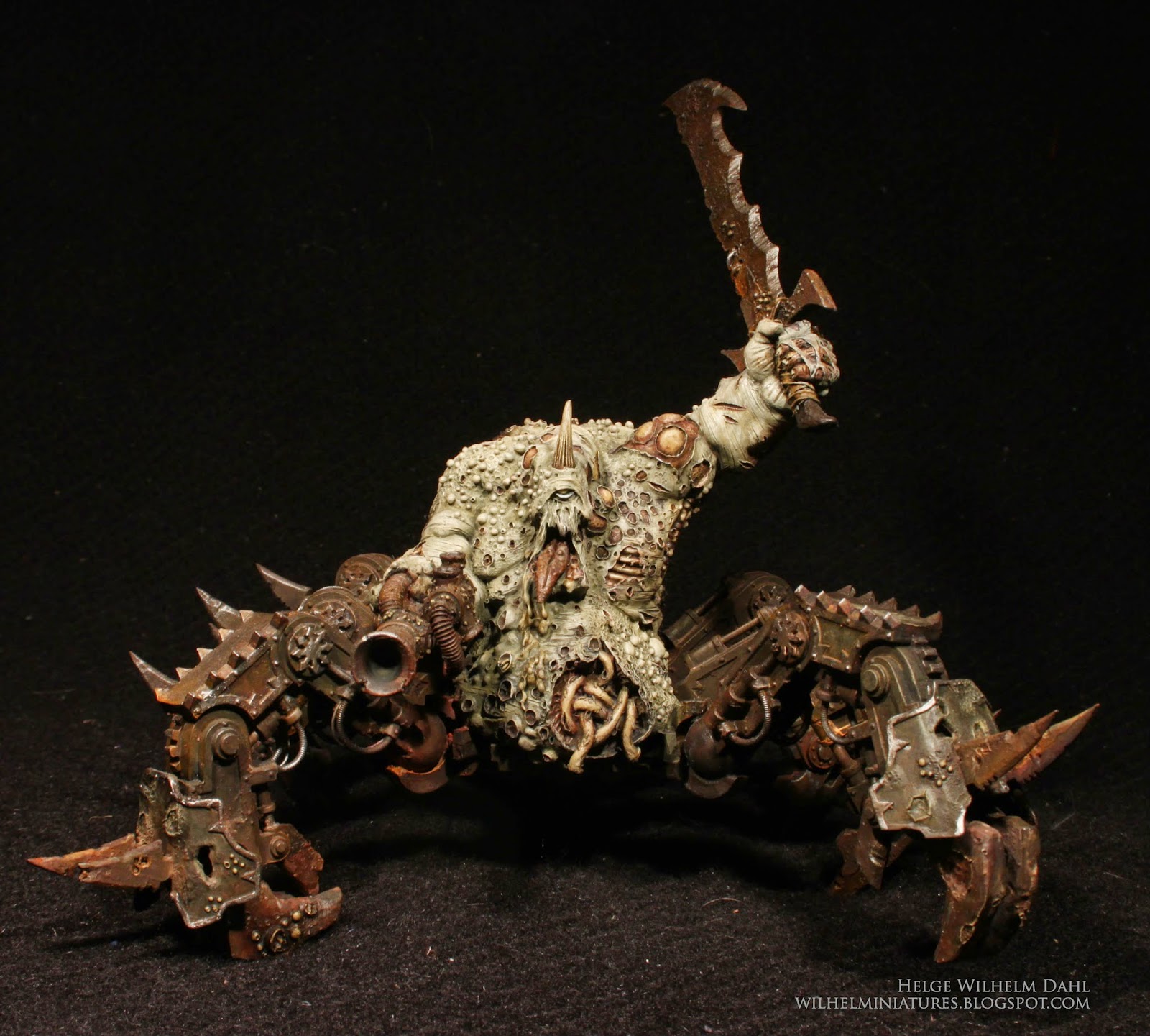 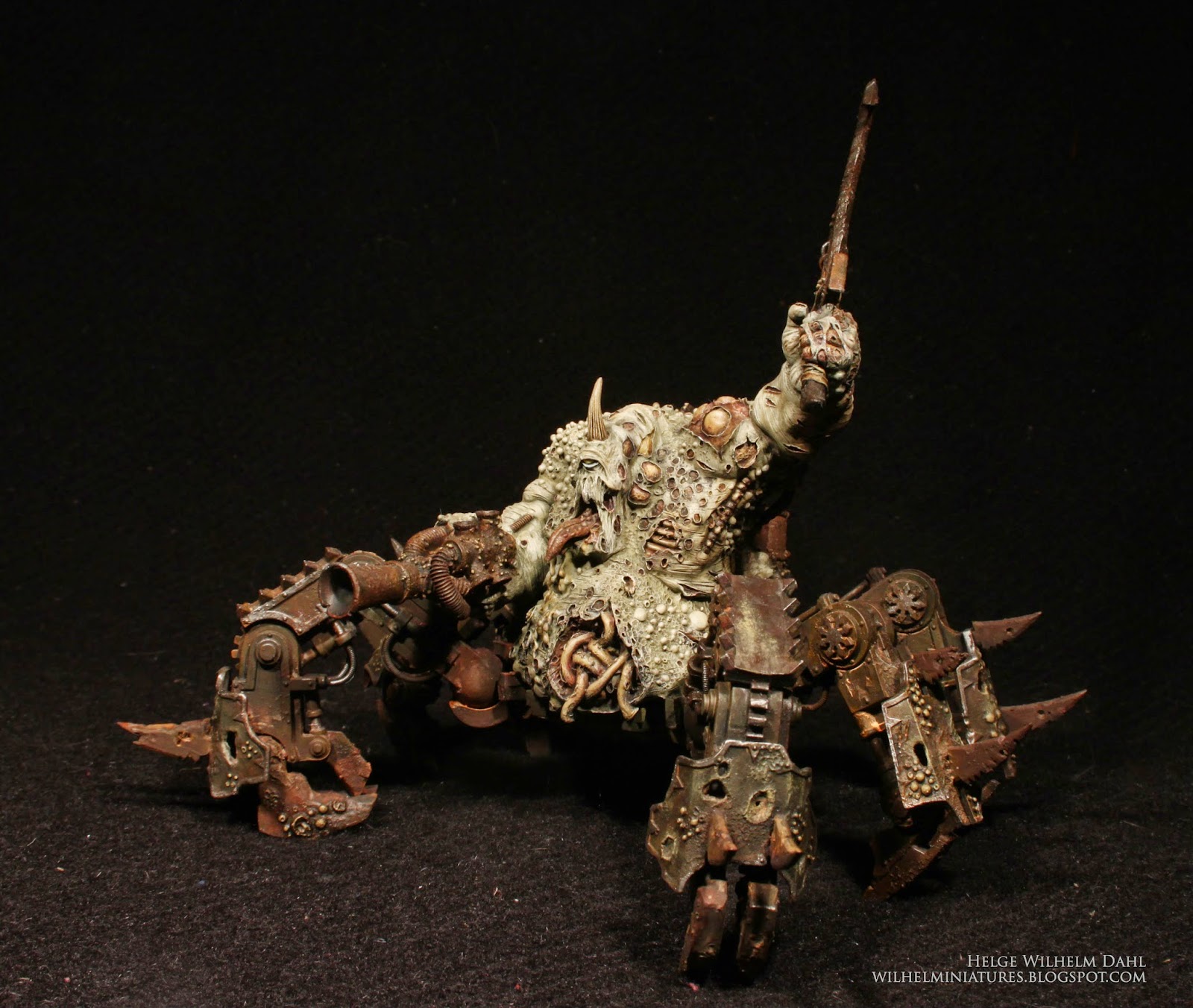 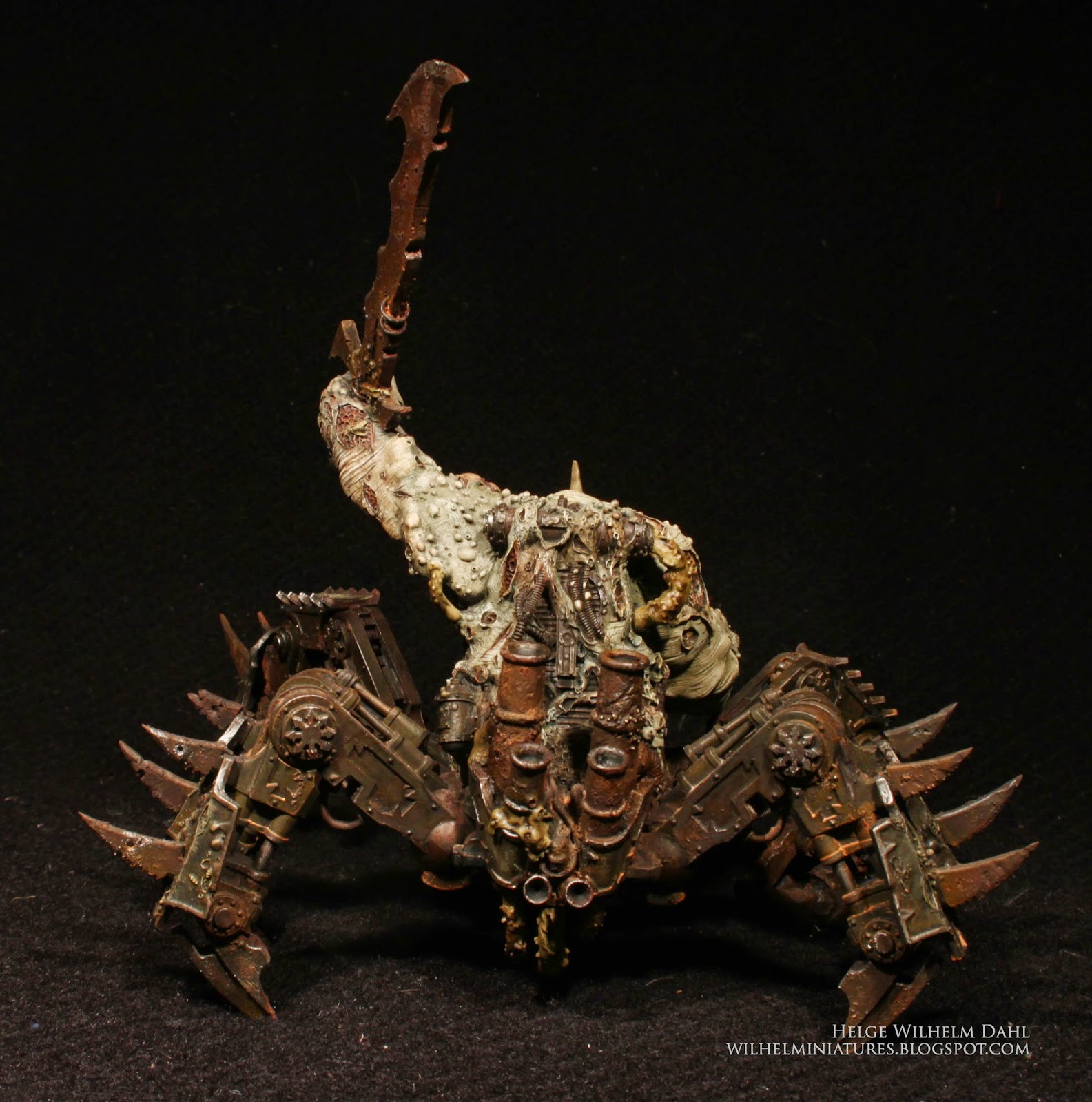 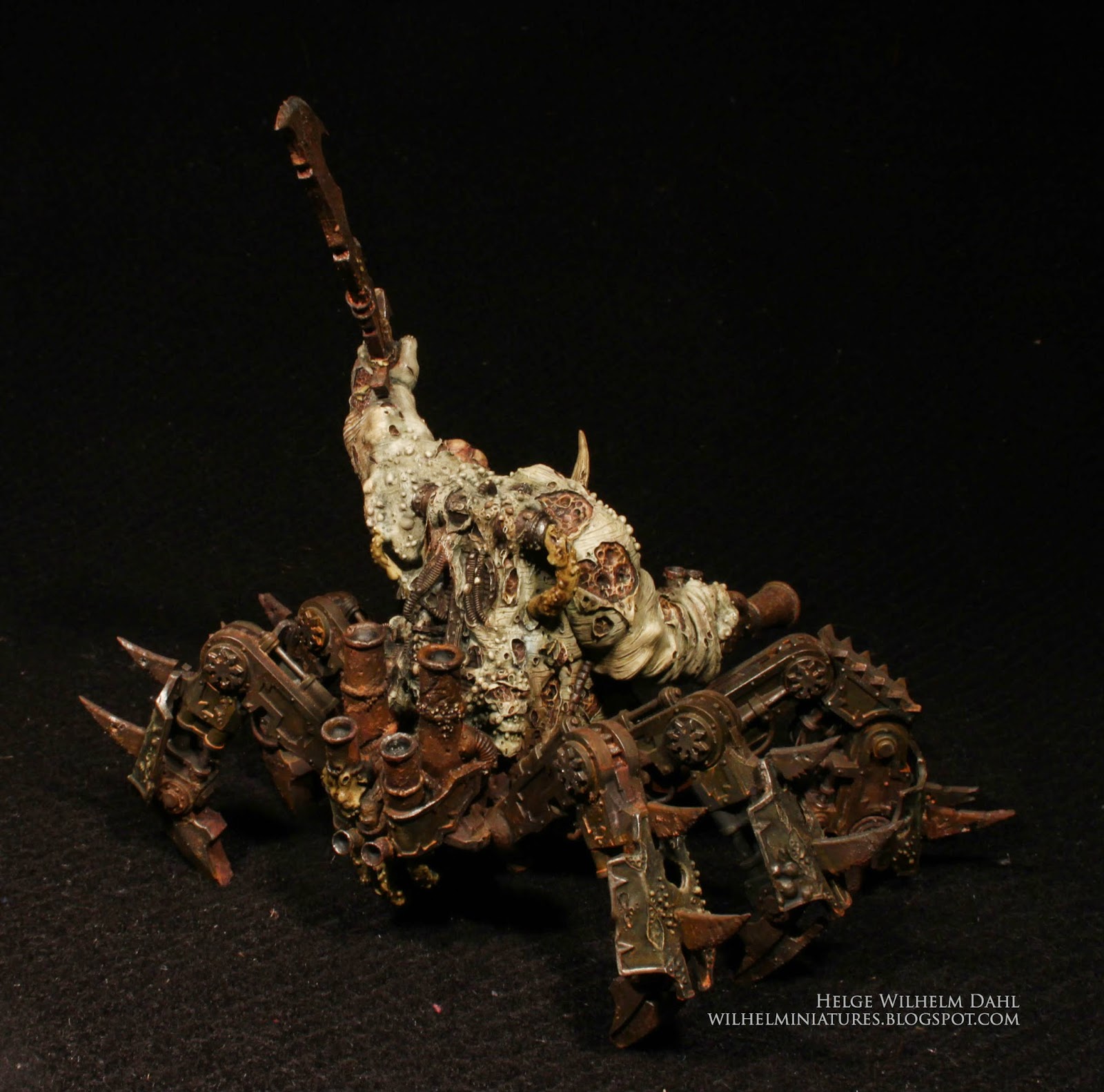 The skin-tone on both Daemon Engines are painted in the same way, it consists of a lot of green and bone-coloured drybrushing, and a dark green oil-wash on top. This was long before I got my airbrush, so they don't look as good as my Forge World Great Unclean One. I like them a lot non the less. FW's big Nurgle models are all some of my favourite GW models. I hope GW's Maggoth Lords are as fun to paint.
Posted by Wilhelm at 05:15 1 comment: