I've never made any Space Wolves before. The reason is that I never really liked them, the GW versions at least. There are some cool ideas and artwork of the Space Wolves, especially from the Horus Heresy, but the models really don't do them justice. They are supposed to be based on vikings, which could have been really cool, if GW did it right. Instead they made baby blue armoured Space Marines with ridiculous hair-styles and fangs. And then there are the new Wulfen, who are basically space werewolves, which I find quite tacky.

The idea behind the Wulfen is however quite interesting. They are a company of the original legion traveling through the Warp and raiding daemon-worlds for 10.000 years, until they suddenly broke through the warp and came back. In my opinion the werewolf part should just be their reputation and how they are described in horrific tales by the survivors who have encountered the Wulfen. But in truth they are not much different from other creatures exposed to the warp for too long, like chaos mutants or possessed. The only real differences are the fact that the Wulfen are good guys(ish) and vikings.

When the Wulfen came out, I started converting a small warband of my own version of them. I based them on FW Gal Vorback, but gave them new weapon-arms and human heads. I'm quite pleased with the green-stuff beards. I still have some work left, but like where this is going. 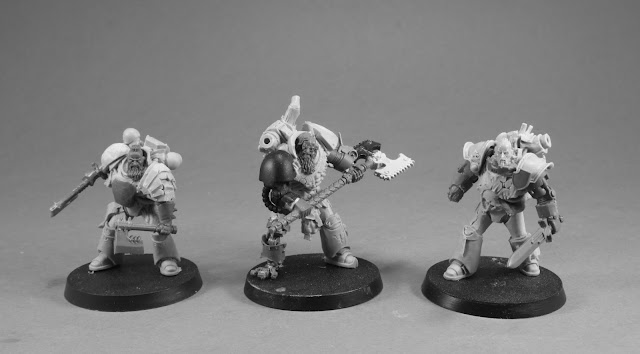