When the plastic Bloodthirster came out, I didn't really like it. I thought the weapons was too big, the wings had some weird looking chaos symbol scars on them, and they had too many oversized horns. I did however buy one, to give myself a conversion challenge. The Khorne: Daemonkin Codex had just come out, and I needed a Bloodthirster for my army, and started to convert it. I failed, and the resolute became far from a Bloodthirster. I ended up creating "The Beast", one of the models I entered in The Fang 2015. Even though I didn't make a Bloodthirster, the Beast turned out quite good.

I didn't think much more of it, until Skarbrand (the named Bloodthirster) came out, and I wanted to try again. This time I managed to convert the model into a Bloodthirster that I like. I actually made two!
Since I don't like the wings, weapons or heads, the only thing I needed to create another BT out of the spare parts was a torso.

I'm quite pleased with how they look so far, and think I managed to make two quite original Bloodthirsters without turning them into something else entirely (like the Beast). What I like most about them, are their heads. I used the heads from FW Hounds of Xaphan, and turned them upside down. The Bloodthisters are blind. The idea is that the wholes that kind of look like eyes are nostrils or ears. I hope they will look less like eyes when painted.

As mentioned, I'm not a fan of the original wings. I gave them creepy fairy wings instead, taken from Nurgle Plague Drones. 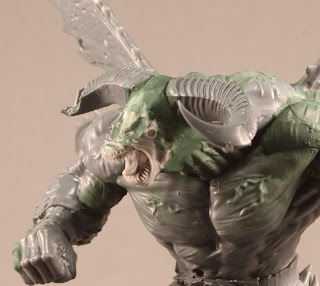 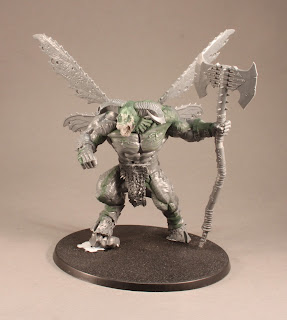 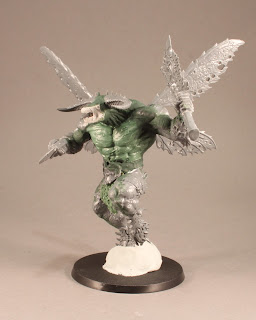