In my last post I showed you my Genestealer Cult Beast. But after posting it, I realized I had only posted a few WIP photos. When I look at other peoples work, I really like to see some pictures of their work in progress. It makes it easier to see which bits where used, and what the thoughts behind the projects are.

While working on the model, I did take some pictures of the progress. I think it would be interesting for some of you to see them all in one place: 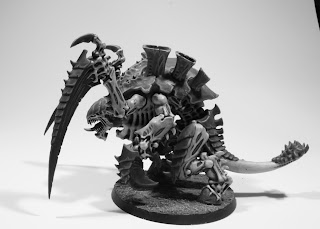 This first picture is just an old picture of a Carnifex from my Tyranid army. I think you all know what a carnifex looks like, but it's nice to have a picture of the base model before seeing how I changed it. 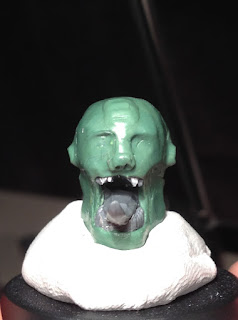 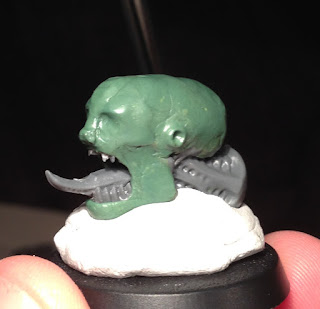 The first thing I did was changing the models head. I wanted to make a monster that looks like a mix of a Tyranid and a human. To make the face more human it needed to be flatter. The most important thing was to have the eyes on the front of the face, and not on the sides. I cut away the models face, the front of the jaw and the armoured part of the head. Then I covered it all with greenstuff. I used hand-cream to make it smooth and to not leave any fingerprints. Using a round silicone clay shaper, I made the basic shape of the models eye-socets and nose. I originally planned to go back and give the it eyes in the next sculpting session, but seeing how creepy the head already looked, I left it blind. 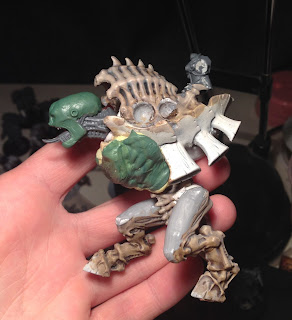 I didn't want my Genestealer Beast to be a Carnifex with a human-looking head, so I had to do something with the body. A green-stuff copied Bloodthirster torso, that was intended for another project, was the exact same scale as the head. This torso is very human-looking, and would help make the model look more like a human-Tyranid hybrid. The best way to integrate this pice onto the Carnifex body was to turn the whole thing upside down.

The ribcage was perfect on the models back, as I think this looks a lot more like the armour of Genesealer than the flat Tyranid plates. Turning the Carnifex torso upside down also made the hole where the lower body usually is, pointing upwards. Instead of cutting this pice away, I decided to make it into a biological throne, and give the model a rider. 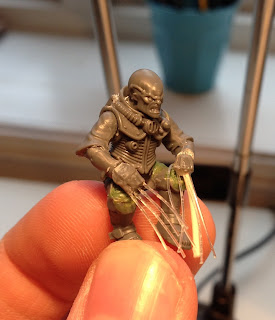 The rider is based on a 3rd generation hybrid from the Overkill box. I didn't want the model to just sit on the Beast, I wanted the rider to be a part of it. To connect the two models together, I gave the rider cables instead of fingers, to glide into the Beasts back. I also gave the driver a psychic collar (not on this picture), to give the impression that they also have a psychic connection. 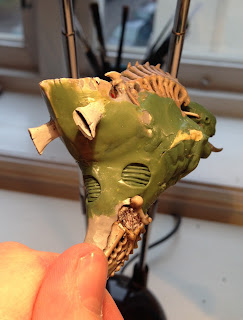 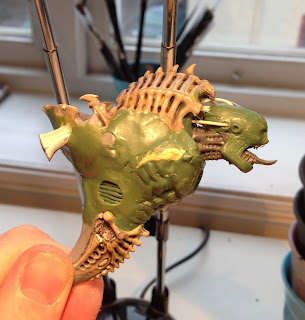 I blended the Bloodthirster torso into the rest of the body with more green-stuff. On this stage I also added some additional details, like the Tyranid sores/gills and the cables on the models head. 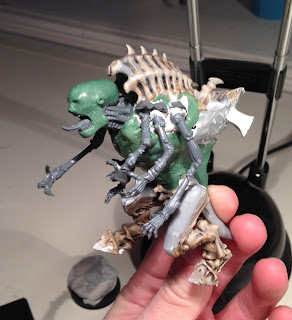 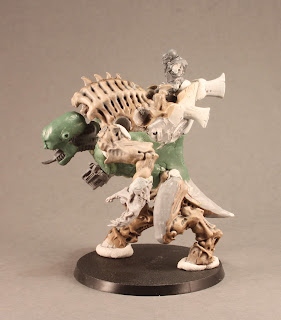 The hardest pard with this model was finding some fitting arms. Using original Carnifex arms looked really clumpy, and smaller Tyranid arms were too small. In the end I went with long thin insectile limbs, made of Plague Drone limbs with Genestealer Rending Claws on the ends. Tyranids originally have three pairs of limbs. But it looked like something was missing when I tried with four arms, so I added another two. It's a mutant after all. 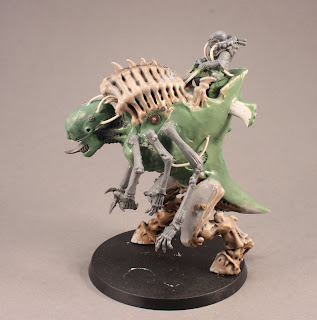 Lastly the whole model was glued together, and a few extra details was added. 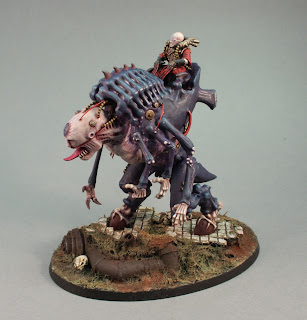 Thanks for looking!
If you have any other questions about how I converted or painted this monstrosity, feel free to ask in the comments below, or find me on facebook as wilhelminiatures.