Me and three other Norwegian Hobbyists are starting a new INQ28 project. The participants are Tommy (aka Bigbossredskullz), Rebecca, Mikkel and me. We made a program in MatLab that randomly generated one of the Chaos gods to each of us. I got Nurgle!
I was actually hoping to get some of the other Gods this time, because I have done a lot of Nurgle models, and wanted to do something new. But now that I've started, I'm really glad it I got Nurgle after all. It's definitely my favourite of the Chaos Gods.

I have countless naked mutant blobs and daemons, and an army of Nurgle Space Marines. This time I wanted to make something different. I'm also really exited about the new Tzaangors box from GW, and want to convert a couple of models based on them. Because of this I want to make a warband focusing on Abhumans or Beastmen. The first two models I put together are my idea of Pestigors (Nurgle infested Beastmen). 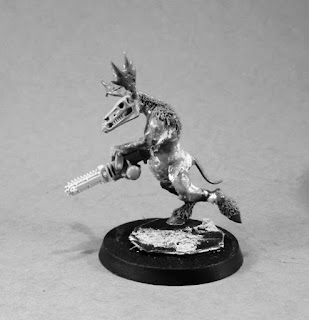 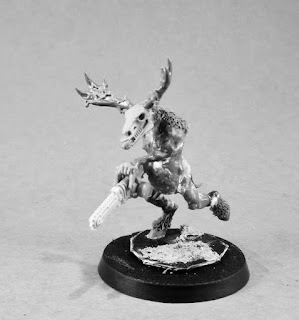 This first one is a regular Pestigor, based on a Plaguebearer with Tyranid legs, a Tom Kings horse head and antlers from the Blight Kings. The model is wielding a chainsaw, based on a FW Solar Auxillia flamer, and a blade form a FW Mechanicum model. 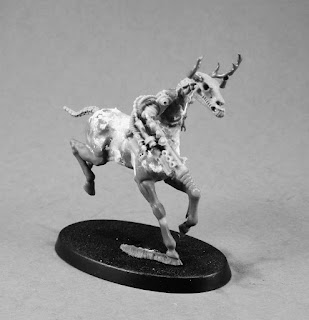 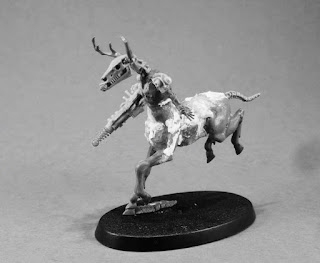 The second Pestigor is mutated into a Centaur. I was inspired by Red Skulls Tzeentch Centaur, and a Slaaneshii one made by John Blanche. I think both of them is based upon the same horse as this one.
This model also features bits from a Plaguebearer, Tomb Kings, Blight Kings and FW Mechanicum. The horse part of the model is a Wood Elves steed.
Posted by Wilhelm at 18:34