When the Betrayal at Calth boxed game came out, I felt it was about time to get back to my Horus Heresy World Eater army. While waiting for the box, I kit-bashed a gladiator themed veteran of some kind. I think he will be the sergeant of my rampagers, if they're allowed to have this weapon combination. I'm not sure, but he will at least be a sergeant of some kind. The torso and right arm are from the Blood Reavers in the Age of Sigmar box, the shield is an ogre belly protector (or whatever the metal things on their bellies are), and the rest are some FW bits I had laying around. I'm quite pleased with this one, so I think there will be a squad of similar looking models for him to lead. 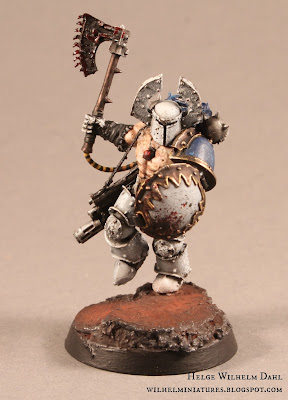 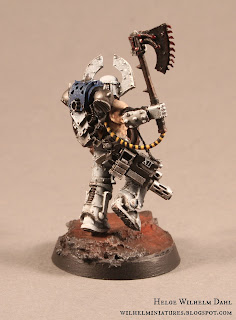 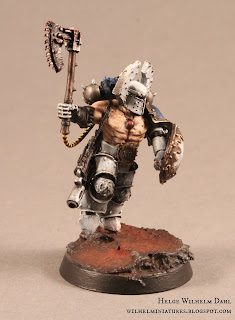 I also made a pair Contemptor Dreadnoughts. I forgot to photograph them before priming, so that are quite dark, but you get the idea. 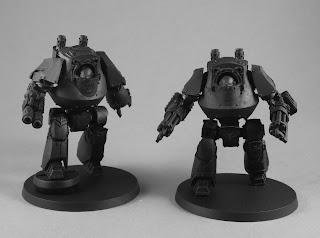 When I got the Betrayal at Calth set, I started to play around with the bits, and made myself a squad of Destroyers. What really annoys me with the box, is that they all have GW's classic Space Marine poses. No running poses, and only one pair of arms able to hold two separate weapons every ten models. This probably works with most legions, but not World Eaters. I want my army to be running towards their enemy, waving their chainaxes around.
Even though they look a bit too relaxed for my taste, the destroyers turned out alright. A thing that is quite great with the set, is that you get a lot of the MKIV helmets with the breathing stripes pointing downwards. These helmets look a lot angrier than the regular ones, which make them work great in my army.

Lastly I made some changes on the Praetor that came with the box. I'm not sure if lightning claws are the best choice game wise, but he looks mean, which is more important. 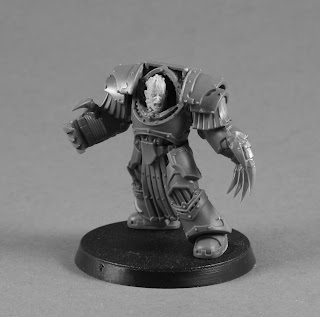